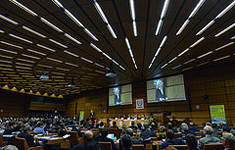 On 23 September 2014, NEA Director-General Mr. William D. Magwood, IV, delivered a keynote address on the opening day of the Scientific Forum on Radioactive Waste: Meeting the Challenge – Science and Technology for Safe and Sustainable Solutions, which was held in conjunction with the IAEA 58th General Conference in Vienna. In his presentation, Mr. Magwood provided an overview of the funding mechanisms for radioactive waste management, citing a number of examples from NEA member countries. The presentation drew on the findings of several NEA reports, including the Economics of the Back End of the Nuclear Fuel Cycle. Read the report 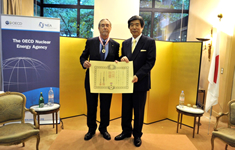 Mr. Luis E. Echávarri, former Director-General of the OECD Nuclear Energy Agency (NEA), was conferred the Order of the Rising Sun, Gold Rays with Neck Ribbon, an imperial decoration of Japan at a ceremony hosted by H.E. Ambassador Kazuo Kodama in Paris on 6 October 2014. The honour was awarded in recognition of the significant contributions Mr. Echávarri has made through his work at the NEA, promoting nuclear safety in Japan and mutual understanding between Japan and the international community.

NEA's Stephen G. Burns confirmed as Commissioner to the US Nuclear Regulatory Commission

Mr. Stephen G. Burns, NEA Head of Legal Affairs and former US Nuclear Regulatory Commission (NRC) General Counsel, was confirmed by the US Senate on 16 September 2014 as a Commissioner of the NRC. Mr. Burns was nominated to become one of the five NRC Commissioners by US President Mr. Barack Obama in July 2014. He will leave the NEA on 31 October 2014 to assume his duties as a Commissioner in early November. 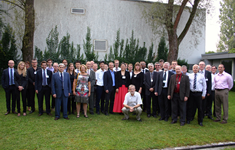 On 17-18 September 2014, the NEA Working Group on Fuel Cycle Safety (WGFCS) held its 9th annual meeting in Vienna, Austria. The objective of the group is to advance the understanding of relevant aspects of nuclear fuel cycle safety for both regulators and operators. In the meeting, participants discussed ongoing regulatory and research activities as well as recent lessons learnt on operating experiences of fuel cycle facilities. The WGFCS working group will be focusing on the comparison and analysis of regulations for long-term interim storage and safety lessons and developments for fuel cycle facilities (FCF) in the post-Fukushima Daiichi accident context.

The latest edition of the "Red Book", Uranium 2014: Resources, Production and Demand, shows that the total identified uranium resource base in 2013 is more than adequate to meet projections of growth in nuclear generating capacity. The key will be getting that uranium into production.

On 9-10 September 2014, the NEA Task Group on Radiological Characterisation and Decommissioning held the start-up meeting of its second phase. During the meeting, participants discussed and defined the objectives of the group's activities, in addition to outlining the main topics of focus for its future work. In its second phase, the group will focus on strategies for optimisation of nuclear facility characterisation from a waste and materials end-state perspective, building on previous task group findings on strategies for radiological characterisation of nuclear facilities undergoing decommissioning, as summarised in the NEA report entitled "Radiological Characterisation for Decommissioning of Nuclear Installations". The main outcome of the group will be a status report which should serve as a reference and guidance document to promote the development of best practice in this field. 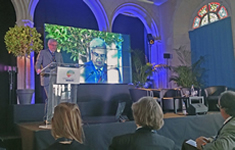 The nearly 200 participants at the International Conference and Debate on the Preservation of Records, Knowledge and Memory of Radioactive Waste across Generations have agreed that future generations should be provided with knowledge and understanding of the environmental heritage they inherit from the past. The conference was held on 15-17 September 2014 in Verdun, France by the NEA, with the support of the French National Agency for Radioactive Waste Management (ANDRA). It provided a forum for both specialists and stakeholders interested in records, knowledge and memory preservation in general, and radioactive waste management in particular, to exchange views and the latest information in the field. Read more about the conference here: oe.cd/HA

An article featured in the latest edition of the Nuclear Law Bulletin provides basic information on the international conventions governing nuclear third party liability and an overview of recent developments to enhance the understanding of the legal framework in which policymakers and practitioners are engaging to respond to the call for broader adherence to the international liability instruments. It is a useful starting point for understanding the benefits of facilitating greater harmonisation of the nuclear liability regimes and of national legislation in nuclear power states which are not yet party to one of the regimes. Read the article here: oe.cd/Ji

On 1-2 September 2014, the Expert Group on Multi-physics Experimental Data, Benchmarks and Validation (EGMPEBV) held its first meeting. The group's programme of work will include the certification of experimental data and benchmark models, as well as establishing the processes and procedures for using that information for the validation of simulation tools. In particular, the group will address the needs related to the validation of coupled "multi-physics" codes, which allow for higher fidelity in the representation of physical phenomenology through a direct coupling between reactor physics, thermal-hydraulics and fuel performance codes.

Statistical verification and validation of the EXFOR database

As a member of the International Network of Nuclear Reaction Data Centres (NRDC), the NEA Data Bank undertakes significant efforts to maintain the highest level of quality in the international database of experimental nuclear reaction data (EXFOR). Over the past two years, the Data Bank has conducted a comprehensive review of cross-section data in the EXFOR database in close collaboration with the IAEA Nuclear Data Section. An efficient review system and associated strategy have been developed to systematically compare more than 10 000 cross-section data sets with the corresponding values in the major evaluated nuclear data libraries. The resulting statistical information shows various interesting trends in the data, including a list of suspicious data sets, for which the associated publications have been systematically reviewed. The review confirmed that the experimental data were compiled correctly in the EXFOR database in most cases, and mistakes have been corrected. Read more about the review here: oe.cd/IK