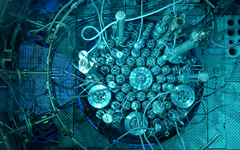 Joint Declaration on the Security of Supply of Medical Radioisotope

Eleven countries have now formally adhered to the Joint Declaration on the Security of Supply of Medical Radioisotopes. The Joint Declaration provides a co‑ordinated political commitment by countries involved in the production and use of medical radioisotopes to bring about necessary changes across the supply chain. It sends a clear signal that the governments have the resolute intention to take co‑ordinated action to ensure the long‑term security of supply of important medical radioisotopes. This effort, led by the NEA High‑level Group on the Security of Supply of Medical Radioisotopes (HLG‑MR), promotes, among other steps, full‑cost recovery of isotope production and the availability of paid reserve capacity. It also provides a platform for ongoing discussions among participating countries on their current or potential future involvement in the supply chain. For more information, read the press release. See the Joint Declaration here. 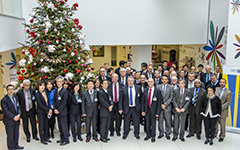 On 15‑18 December 2014, the NEA hosted for the first time the Generation IV International Forum (GIF) Policy Group meeting, as well as the meeting of the Experts Group. The NEA has been providing technical secretariat services to the GIF since 2004, essentially by supporting the research and development activities of the Forum within the system and project arrangements and in the methodology working groups. During the opening of the meeting, NEA Director‑General Mr William D. Magwood, IV, who served as the GIF's first Chairman, reaffirmed the importance of promoting international R&D activities in innovative reactor systems, and Dr John E. Kelly, Chair of the GIF Policy Group, thanked the NEA for supporting the Forum. Major topics of discussion during the week were the engagement of regulators, essentially through the NEA Committee on Nuclear Regulatory Activities (CNRA), and the safety approaches developed by the GIF, in particular through the development of safety design criteria. In a separate meeting, there were also discussions on the extension for another decade of the Framework Agreement governing the GIF.

On 9‑10 December 2014, the NEA Component Operational Experience, Degradation and Ageing Programme (CODAP) held the final meeting of the first phase (2011‑2014) of the Programme, whose key objectives are to encourage and support the multilateral exchange of operating experience data and evaluations of service‑induced degradation of metallic piping components and non‑piping passive components. The CODAP online event database includes over 4000 event records from 324 commercial nuclear power plants. During the meeting, participants discussed the results of CODAP Phase 1, as well as the preliminary plans for Phase 2 (2015‑2017), which include two annual reports to collect and analyse the event data with the objective of providing the lessons learnt for practical implications in new and operating plants.

Estimation of potential losses due to nuclear accidents

On 11‑12 December 2014, the NEA Ad hoc Expert Group on Costs of Nuclear Accidents, Liability Issues and Their Impact on Electricity Costs met to discuss a range of issues relating to the estimation of economic losses due to nuclear accidents. The key objective of the meeting was to discuss and review the hypothetical scenario analysis for different types of releases of radioactivity in the event of a nuclear accident. These analyses have been performed by member countries to support the study and to help illustrate the NEA methodology of estimation of losses and identify key cost drivers. An additional meeting of the expert group may be organised in the coming months to review the final draft report that is expected to be published in 2015.

The safety case for deep geological disposal of radioactive waste

The concept of a "safety case" for a deep geological repository for radioactive waste was first introduced by the NEA Expert Group on Integrated Performance Assessment (IPAG). It was further developed in the NEA report entitled Confidence in the Long-term Safety of Deep Geological Repositories (1999), and since then it has been taken up in international safety standards as promulgated by the International Atomic Energy Agency (IAEA) and more recently in recommendations by the International Commission on Radiological Protection (ICRP) on the application of the system of radiological protection in geological disposal. A symposium on "The Safety Case for Deep Geological Disposal of Radioactive Waste: 2013 State of the Art" demonstrated that a clear understanding of the technical components of a safety case already exists. The definition and implementation of a safety case varies across countries and over time, with some focusing on post-closure and others covering subjects such as operational safety. At its core, the development of a safety case for a geological repository is a scientific and technical activity based on rigorous tools and processes that must also satisfy regulatory and societal requirements. Click here to read more on the safety case.

Since November 2011, the International Commission on Radiological Protection (ICRP) has been hosting dialogue meetings with stakeholders affected by the Fukushima Daiichi nuclear power plant accident. The NEA has actively co‑sponsored and participated in all ten dialogue initiative meetings and has provided a closing summary of results of interest to participants and to the NEA Committee on Radiation Protection and Public Health (CRPPH). Following the 12th and final dialogue meeting in September 2015, the NEA and ICRP Secretariats will produce a summary of the organisational processes and approaches necessary for successful dialogues, and of results relevant to the CRPPH community.

Three dialogues in 2014 addressed, respectively, challenges in Minamisoma, raising children and the value of culture and tradition. All three maintained that protection of children is key, that government in general is still mistrusted, that health problems exist and that stakeholders do not have sufficient access to or understanding of information needed to decide to stay or relocate. They also stressed that there is a need to build a shared future vision, that understanding of information eases stress and that cultural traditions can help bind communities together. 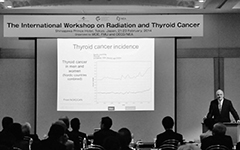 An article has just been published about the International Workshop on Radiation and Thyroid Cancer, which took place on 21‑23 February 2014 in Tokyo, Japan, to support the efforts of the Fukushima Prefecture and the Japanese government in enhancing public health measures following the Fukushima Daiichi nuclear power plant accident in March 2011. The workshop, which was designed to develop a state‑of‑the‑art scientific understanding of thyroid cancer in children and of radiation‑induced thyroid cancer (papillary carcinoma) in particular, brought together the world's top experts in the field, including medical doctors, epidemiologists and radiological risk assessment specialists from ten countries. Given the medical understanding that thyroid cancer grows at a slow pace, the thyroid cancer workshop was able to conclude that there is no identifiable evidence to demonstrate that the increase in thyroid cancers observed thus far in the Fukushima Prefecture has been caused by exposure to 131I after the Fukushima Daiichi nuclear power plant accident. Read more about the related data and observations here.

In the three years since the Fukushima Daiichi nuclear power plant (NPP) accident, the international community has gained perspective on the implementation of the Japanese nuclear liability regime, which reflects internationally accepted nuclear liability principles. Soon after the emergency, the operator of the damaged nuclear power plant, Tokyo Electric Power Company (TEPCO), and public authorities in Japan established the basic procedures required to compensate victims for damage incurred due to the accident. Since March 2011, these procedures have been adapted to allow the processing of a large number of applications for compensation within a reasonable amount of time. See this article for an update on compensating victims, financing the compensation and the expiry of the compensation.

The Spent Fuel Isotopic Composition Database (SFCOMPO) has been hosted by the NEA since 2001. In 2012, a collaborative effort led by the NEA Data Bank and Oak Ridge National Laboratory (ORNL) has resulted in the creation of an enhanced relational database structure and a significant expansion of the SFCOMPO database, which now contains experimental assay data for a wider selection of international reactor designs. The new database was released online in 2014. This new SFCOMPO database aims to provide access to open experimental SNF assay data to ensure their preservation and to facilitate their qualification as evaluated assay data suitable for the validation of methodologies used to predict the composition of irradiated nuclear fuel. For further information on SFCOMPO, see this article.