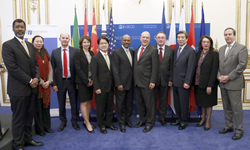 On 26 February 2015, the Framework Agreement for International Collaboration on Research and Development of Generation IV Nuclear Energy Systems was extended for ten years, paving the way for continued collaboration among participating countries in this important area of Gen IV R&D. A signing ceremony was held at the OECD in the presence of Mr Angel Gurría, OECD Secretary‑General and Depositary of the Framework Agreement, and Mr William D. Magwood, IV, NEA Director‑General. The Generation IV International Forum (GIF) is a co‑operative international endeavour which was set up in 2005 to carry out the research and development needed to establish the feasibility and performance capabilities of the next generation of nuclear energy systems. For more information on the GIF, see www.gen-4.org.

Joint Declaration on the Security of Supply of Medical Radioisotopes

France and South Africa have recently adhered to the Joint Declaration on the Security of Supply of Medical Radioisotopes, bringing the number of adhering countries to 13. The Joint Declaration, which seeks to ensure the security of supply of the most widely used medical radioisotope, molybdenum‑99 (Mo‑99), remains open to adhesion by any country that wishes to do so. Read the declaration: oe.cd/RW.

The NEA workshop on Testing PSHA Results and Benefits of Bayesian Techniques for Seismic Hazard Assessment was held on 4‑6 February 2015 in Pavia, Italy. The workshop was organised by the NEA Working Group on Integrity and Ageing of Components and Structures (WGIAGE) to identify good practices for work on regulation, as well as to find targets for future research on this topic. During the workshop, geologists, seismologists, statisticians and engineers shared and assessed experiences on the testing methodologies of the probabilistic seismic hazard analyses. Workshop presentations highlighted the need to compare the results of local seismic hazard analyses in regions of high and low seismicity, and to compare both against all available observations. The comparisons are especially important for very rare events for which no long‑term records and no observation data are available. Seismic hazard requirements could have major safety and cost impacts on nuclear power plants. The PSHA of a nuclear power plant site should therefore be as realistic as feasible, and consistency checks against all available data are necessary. 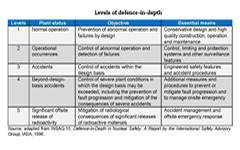 On 11‑13 February 2015, the NEA Senior‑level Task Group on Defence‑in‑Depth held its final meeting on the preparation of its report on defence‑in‑depth following the Fukushima Daiichi nuclear power plant accident. One of the main objectives of the report is to explain the background, concept and context of defence‑in‑depth, which is a well-established tool to assist in delivering high levels of nuclear safety. The report also aims to make recommendations to enhance the implementation and use of defence‑in‑depth. The report is expected to be issued mid-2015. 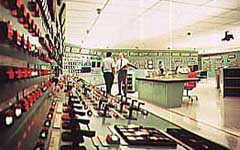 On 19‑21 February 2015, more than 30 experts on human factors gathered in Charlotte, North Carolina (USA) to share insights and best practices for validating the operations of nuclear power plants. The Workshop on Human Factors Validation of Nuclear Power Plant Control Room Designs was organised by the NEA Working Group on Human Organisational Factors and focused on the unique challenges of confirming the combined performance of operating staff and control equipment. Participants identified recommended practices for ensuring effective validation and areas worthy of further research. A particular point of discussion was the extent to which operations should be confirmed for unanticipated conditions, such as severe accidents. Participants will be applying the workshop results in their efforts to either develop, or provide regulatory oversight to, new plant designs and upgrades to existing plants.

On 3‑4 February 2015, the meeting of the NEA High‑level Group on the Security of Supply of Medical Radioisotopes (HLG‑MR) concentrated on placing increased emphasis on the metrics of the medical radioisotopes business and its progress towards economic sustainability. An update was provided on the recently issued Joint Declaration on the Security of Supply of Medical Radioisotopes and during the meeting South Africa confirmed its adherence to the Declaration. France confirmed its adherence shortly thereafter. These developments constitute additional solid steps towards a united international approach. In addition, a presentation was given on a revised demand and supply study for the period 2015 to 2020, which is expected to be published as a report later in 2015.

An International Workshop on Innovations in Water‑cooled Reactor Technologies was held on 11‑12 February 2015. It attracted nearly 50 experts from 7 NEA member countries (Canada, Finland, France, Hungary, the Russian Federation, the United Kingdom and the United States), as well as from the People's Republic of China. Representatives from regulatory authorities, utilities, vendors, research organisations and academia participated in the workshop, sharing their perspectives on safety and performance improvements that characterise modern generation III reactors, as well as possible innovations that might be featured in future water-cooled reactor designs, including small modular reactors based on light water reactor technology. The development of innovative fuels, including accident-tolerant fuels, was also discussed. Drivers for innovation in reactor and fuel technologies include regulatory and utility requirements, new environmental constraints, changes in electricity markets and competition with other low‑carbon generation sources. Examples of initiatives to facilitate the development of new technologies, from research to market, were also discussed. Presentations are available here.

Inventorying and reporting of spent fuel and radioactive waste

Optimisation of radiological characterisation and decommissioning

On 3‑4 February 2015, the Task Group on Radiological Characterisation and Decommissioning (TG‑RCD) held its second meeting. The main objective of the group is to provide member countries with up‑to‑date information and recommendations to consider in selecting and tailoring strategies for optimising radiological characterisation in nuclear facilities decommissioning projects from a waste and materials end‑state perspective. To help achieve this, the group continued its work on a questionnaire to review relevant worldwide experience and efforts made in decommissioning projects to cope with the complex task of gathering waste and material characteristics data for multiple purposes. With separate sections in the questionnaire for regulators, facility owners and waste management organisations, the group hopes to identify and cover all important issues and key factors resulting from waste and materials management processes for optimised final disposition. In April 2015, the questionnaire will be distributed to a wide audience, and the group encourages all recipients to respond, sharing their experience and knowledge. 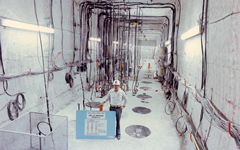 The NEA Salt Club held its annual meeting on 25 February 2015 to review its progress on rock salt scientific studies. The Salt Club Microbial Group reported that gas generation by microbes does not impact the long‑term integrity of geological repositories, as no viable organisms were detected to date in incubations of halite from the Waste Isolation Pilot Plant (WIPP). To follow up, an NEA report summarising key conclusions of microbial behaviours will be prepared. With the advancing scientific and geotechnical understanding of rock salt, the Salt Club plans to compile a seminal report that compares and contrasts characteristics of bedded and domal salt as they pertain to disposal of heat‑generating radioactive waste in salt formations. It is anticipated that the report will cover various key aspects of rock salt, including mechanical properties, thermal effects, brine migration, creep and mesoscale lithology. In reviewing the ongoing activities, the group recognises the importance of geomechanical integrity of the repository and will continue to focus future work on integrity analysis of the geological and geotechnical barriers.

The Global Health Security Initiative (GHSI) Radio-Nuclear Threats Working Group (RNWG) is an informal, international partnership among the G8 + Mexico to strengthen health preparedness and to respond globally to threats of chemical, biological and radio-nuclear terrorism (CBRN) and pandemic influenza. The NEA Committee on Radiation Protection and Public Health (CRPPH) has been associated with this programme since 1998 and hosted its February 2015 meeting. The latter was attended by experts from Canada, France, Germany, the United Kingdom, the United States, the World Health Organization (WHO), the International Atomic Energy Agency (IAEA) and the NEA. Participants discussed the development of a radionuclide bioassay laboratory network; the prioritisation of radiological/nuclear threats building on the Threat and Risk Assessment Tool developed by the Risk Management and Communications Working Group; the implementation of an IT‑based tool to guide political decision‑makers during a radiological/nuclear incident; and a survey of countries on potassium idodide (KI) policies and procedures. The CRPPH presented the status of its ongoing work and proposed that the INEX‑5 exercise could serve as a mechanism to test the status of response to radiological/nuclear threats.

On 4‑5 February 2015, the Programme Review Group of the NEA Thermodynamics of Advanced Fuels – International Database (TAF‑ID) Project held its fifth meeting. The TAF‑ID Project was established in January 2013 and is supported by nine organisations from six NEA member countries (Canada, France, Japan, the Netherlands, the Republic of Korea and the United States). It aims to establish a comprehensive, internationally recognised and quality‑assured database of phase diagrams and thermodynamic properties of advanced nuclear fuels to meet the specialised requirements for the development of advanced fuels for the current and future generation of nuclear reactors. The February meeting was devoted to agree upon the 2015 programme of work and to extend the existing database with models for new isotopic systems for fission products, corium in‑vessel and ex‑vessel, metallic and thorium‑based fuels, resulting in a new working version (accessible to the project signatories) and a public version, based on previously published data.

On 16‑17 February 2015, the NEA Expert Group on Multi‑physics Experimental Data, Benchmarks and Validation (EGMPEBV) held its second meeting. The group was established to provide member countries with guidelines and consensus recommendations for validating novel multi‑physics simulations which are being developed within the nuclear science community. At the meeting, participants exchanged information and established co‑operative plans of work. Two task forces launched by the group are underway. The first will provide guidance on the evaluation of both historical and newly acquired multi‑physics experimental data and its subsequent benchmark qualification, while the second will focus on validation methodologies to be used by practitioners in research and industry. The group anticipates a very active future in this area as nuclear multi‑physics computation continues to advance steadily.

A series of NEA Working Party on Scientific Issues of Reactor Systems (WPRS) meetings was held on 17‑20 February 2015 and attended by over 50 participants from 16 countries and several international organisations. The WPRS and its four expert groups conduct studies on the reactor physics of advanced nuclear systems, reactor fuel performance, radiation transport and shielding, and the uncertainties associated with the modelling of these phenomena, particularly for reactor transient events. Highlights of the meetings include a proposal to further develop the SINBAD database of shielding experiments in the area of fusion systems and to identify experiments useful for improving neutron cross‑section data. Participants also discussed the status report from a study on uncertainties in transient modelling in light water reactors which is now entering the phase of system calculations requiring coupled neutronics/thermal hydraulics modelling. 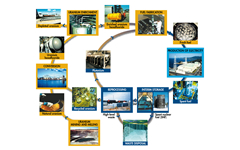 Activities on scientific issues of the nuclear fuel cycle

The NEA Working Party on Scientific Issues of the Nuclear Fuel Cycle (WPFC) held its annual meeting on 18 February 2015 reviewing the status and progress of activities in each WPFC expert group. At the meeting, participants noted recent highlights such as the report prepared by the Expert Group on Innovative Fuels entitled State‑of‑the‑art Report on Innovative Fuels for Advanced Nuclear Systems and the organisation of the 13th Information Exchange Meeting on Actinide and Fission Product Partitioning and Transmutation (IEMPT) in Seoul, Republic of Korea. It was decided that a new Expert Group on Liquid Metal Technology will replace the existing Expert Group on Heavy Liquid Metal Technology to include activities related to liquid sodium technology. The annual meeting also provided the occasion for national representatives to present the current status of the nuclear fuel cycle and R&D programmes in their respective institutions.