Following unanimous acceptance by the Generation IV International Forum (GIF) members, Australia became the 14th member of the Forum on 22 June 2016. The GIF Charter was signed by Dr Adrian (Adi) Paterson, CEO of the Australian Nuclear Science and Technology Organisation (ANSTO). With a staff of about 1 200 people, 250 of whom have doctorate degrees, ANSTO has a balanced mix of fundamental and applied research capabilities, with research facilities in the field of material science centred around the Open Pool Australian Lightwater (OPAL) reactor, a multi‑purpose research reactor that also produces medical radioisotopes. Neutron beam instruments which use OPAL's neutrons are used for characterising materials. In addition, ANSTO has several accelerators for ion beam analyses. In order to become fully engaged in the GIF's research activities, particularly in the area of materials for very high temperature and molten salt reactors for which ANSTO has expressed interest, Australia will need to sign the GIF Framework Agreement and its Extension. For more information on GIF, see www.gen-4.org. On 23 June 2016, the People's Republic of China signed the ten‑year extension of the Framework Agreement for International Collaboration on Research and Development of Generation IV Nuclear Energy Systems. A signing ceremony was held at the OECD in the presence of His Excellency ZHAI Jun, Ambassador of the People's Republic of China to France, and Mr William D. Magwood, IV, NEA Director‑General. The GIF is a co‑operative international endeavour which was set up in 2005 to carry out the research and development needed to establish the feasibility and performance capabilities of the next generation of nuclear energy systems. The extension of the GIF Framework Agreement enables continued collaboration among participating countries in this important area of Gen IV R&D. On 28-30 June 2016, the NEA participated in the second World Nuclear Exhibition (WNE) in Le Bourget, France, which brought together key figures in the global nuclear energy industry. NEA Director‑General Mr William D. Magwood, IV was a featured speaker in the panel discussions on "Innovations for 21st Century Nuclear Energy" and "Safety, Quality and Project Delivery Certainty – Key Ingredients for Any Successful Major Project". Mr Magwood also chaired the WNE Awards Ceremony, which bestowed the award for progress in nuclear safety upon AREVA for modular multi-purpose robots in support of nuclear investigation operations. Dr Jaejoo Ha, Head of the NEA Division of Nuclear Development, participated in the panel discussion on "Pragmatic Management of the Back-end of the Fuel Cycle – A Pathway to Sustainability". NEA representatives were present throughout the Exhibition at its publications and information stand. The NEA Committee on the Safety of Nuclear Installations (CSNI) held its biannual meeting on 8‑9 June 2016. As part of its normal programme of work, the Committee approved 13 new tasks and 10 reports, including the final report of the NEA Senior Expert Group on Safety Research Opportunities Post‑Fukushima (SAREF), which was established to identify research activities that would address safety research knowledge gaps and support safe and timely decommissioning in Japan. In its report, the group recommends activities that can take advantage of the information and insight gained from the decommissioning of the Fukushima Daiichi nuclear power plant both in the near term and the long term. Among the two near-term activities suggested by SAREF are a preparatory study for actual fuel debris analysis and a project to collect and analyse information from the reactor buildings and containment vessels of the Fukushima Daiichi nuclear power plant. Participating members agreed that these two near‑term activities should be further developed into proposals for joint projects to be considered by the Committee at its next meeting in December 2016. The NEA Committee on Nuclear Regulatory Activities (CNRA) held its biannual meeting on 6‑7 June 2016. Among the decisions taken, it approved the release of the Report of the Survey on the Design Review of New Reactor Applications: Volume 4 – RCS and Associated Systems. It agreed to proceed with next steps for formulating a mandate with priorities and milestones for an ad hoc group on safety culture. It also agreed to hold a topical discussion on the impact of the economic situation on relations between licensees and regulatory bodies at the next CNRA meeting in December 2016. Additionally, participation was encouraged in the forthcoming NEA Workshop on Stakeholder Involvement in Decision Making to be held on 17‑19 January 2017 in Paris, France. During the meeting, the Committee recognised the valuable contributions of its outgoing chair, Dr Jean‑Christophe Niel, up until recently Director‑General at the French Nuclear Safety Authority (ASN) and now Director‑General at the French Institute for Radiological Protection and Nuclear Safety (IRSN), and elected its new Chair, Mr Victor McCree of the US Nuclear Regulatory Commission (NRC). 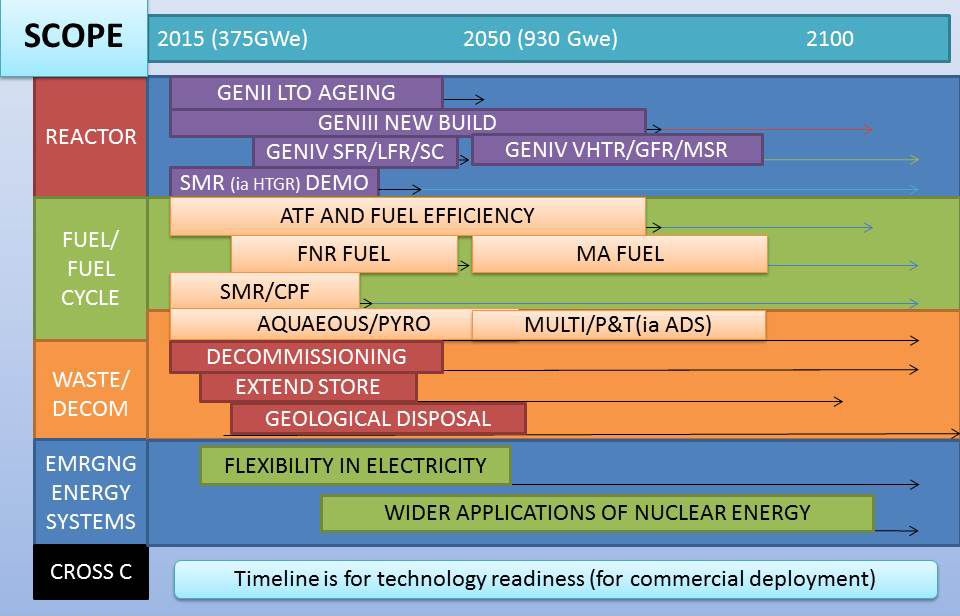 Following a series of expert meetings that took place in the spring, the NEA Nuclear Innovation 2050 (NI2050) initiative held an Advisory Panel meeting on 20-21 June 2016. The Chairs of each expert meeting presented extended reports on the outcomes of their work, in particular on the list of priorities for nuclear fission R&D on reactors, fuels and fuel cycles, decommissioning and waste management, and emerging energy systems and technologies. The NEA Divisions of Nuclear Science, Nuclear Safety Technology and Regulation, Human Aspects of Nuclear Safety, and Radiological Protection and Radioactive Waste Management gave presentations on the ongoing activities in their respective fields, underlining the collaborative and cross-cutting nature of the NI2050 initiative. The Advisory Panel, in line with the terms of reference of the initiative, decided to advance the work by analysing in more detail how R&D can be accelerated to bring innovation technologies to market, enhancing the potential long‑term contribution of nuclear fission in a low-carbon energy future towards 2030, 2050 and beyond. On 28-29 June 2016, the NEA Working Party on Nuclear Emergency Matters (WPNEM) met with the European Commission Joint Research Centre (JRC) in Ispra, Italy to discuss lessons learnt from emergency situations. As nuclear emergency situations are rare, learning is very dependent on exercises, such as the NEA International Nuclear Emergency Exercises (INEX). However, emergency situations caused by natural and technological disasters occur more commonly and can thus be a source of lessons learnt, particularly for evacuation and sheltering decisions. For this reason, the WPNEM reached out to the OECD Working Group on Chemical Accidents (WGCA) and the JRC, which have been working together for some time on chemical accident analyses. The meeting was very informative and constructive, and both parties agreed to continue collaborating on lessons learnt from non-nuclear accidents.

The NEA Nuclear Science Committee (NSC) held its annual meeting on 22‑24 June 2016 to review progress in each of its work areas, including reactor physics, fuel cycle physics and chemistry, criticality safety, material science and radiation shielding. Over the past year, the NSC working parties and expert groups have been involved in co‑ordinating these various activities, with two new expert groups in particular that have established challenging programmes in the areas of accident‑tolerant fuels and coupled multi‑physics simulations. In both these areas, work involves cross‑disciplinary co‑operation and expertise, bringing together participants from several existing NSC programmes. As part of an ongoing review of experimental needs, the meeting featured presentations from three new and/or refurbished experimental facilities: i) the Jules Horowitz Reactor in France, now in the later stages of construction; ii) the TREAT reactor in the United States, currently undergoing major refurbishment; and iii) the MBIR reactor project in the Russian Federation launched in January 2016.

Development, application and validation of nuclear data and codes

Following NEA Steering Committee approval of the establishment of a new governing body for the NEA Data Bank, the newly founded Management Board for the Development, Application and Validation of Nuclear Data and Codes (MBDAV) held its first meeting on 21‑22 June 2016. Progress was reviewed in each of the main Data Bank work areas. One particular highlight was the development of verification, testing and processing tools of evaluated nuclear data, which will greatly improve the efficiency of checking for new evaluations of neutron cross-section data, including evaluations currently being introduced into the latest development version of the JEFF nuclear data file. Participants also discussed the recommendations of the task force which had been established to review the current products and services provided by the Data Bank, and to consider how these might best be developed to meet the future needs of the technical community. They stressed the need to respond to current trends in computer simulation methods, as increased accessibility to high-performance computing has led to the development of advanced methods, such as coupled multi-physics modelling techniques. Participating members also discussed and approved a proposed mandate for the MBDAV, and elected a Chair and Vice Chairs.