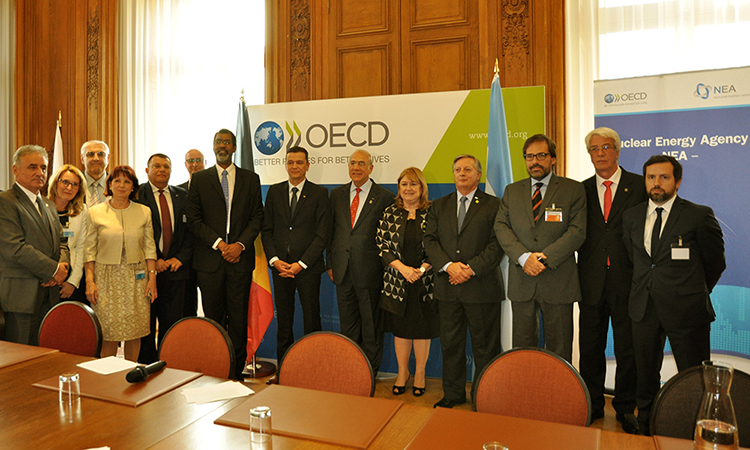 Argentina and Romania to join the NEA

On 7 June 2017, the accessions of the Argentine Republic and Romania to the Nuclear Energy Agency (NEA) and its Data Bank were formalised with official exchange of letters between each country and Secretary‑General of the Organisation for Economic Co‑operation and Development (OECD), Angel Gurría. An official ceremony took place in the presence of a Romanian delegation led by Prime Minister Sorin Grindeanu and Minister of Public Finance Viorel Stefan, and an Argentine delegation led by Minister of Foreign Affairs and Worship Susana Malcorra and Minister of Energy and Mining Juan José Aranguren. NEA Director‑General William D. Magwood, IV officiated the ceremony. As each country may select the date at which its rights and responsibilities as an NEA member begins, Argentina has selected 1 September 2017 as the start of its membership and Romania has selected 15 October 2017. Both Argentina and Romania possess strong and highly experienced nuclear technology infrastructures that will enable them to be vibrant contributors to the mission of the NEA. These accessions highlight the commitment of both countries to implementing the highest standards in their national nuclear energy policies and programmes. Read more about the accessions here 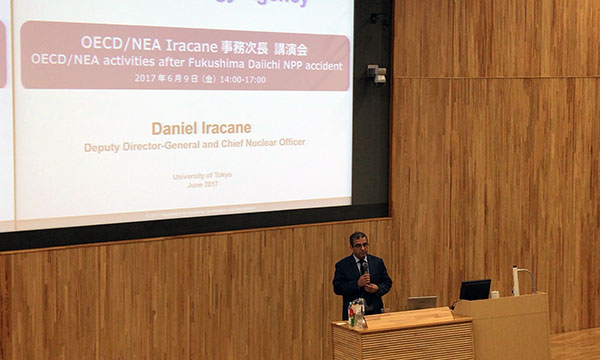 On 9 June 2017, the University of Tokyo's Department of Nuclear Engineering and Management held a special lecture titled "NEA activities in the aftermath of the Fukushima Daiichi nuclear power plant accident". NEA Deputy Director‑General and Chief Nuclear Officer Daniel Iracane delivered a presentation on NEA activities that aim to enhance nuclear safety and to improve safety culture in NEA member countries, including the international joint projects on nuclear safety research. During his speech, Mr Iracane underlined the need to enhance nuclear safety by also taking into consideration factors such as competences, science and innovation. Organised as part of a human resource development programme for regulatory authorities, which is supported by Japan's Nuclear Regulatory Authority, the lecture also included discussions on current and planned activities related to human resource development in NEA member countries. 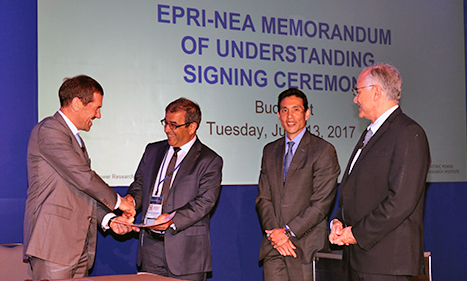 A Memorandum of Understanding for Cooperative Activities was signed between the NEA and the Electric Power Research Institute, Inc. (EPRI) on 13 June 2017, recognising the value of increased collaboration between both parties. The purpose of the MOU is to deepen both parties' understanding of the global research needs in the area of nuclear energy, taking into consideration the consolidated perspectives of utilities and the industry, as well as those of regulators and government organisations. The MOU seeks to reduce knowledge gaps by facilitating exchange between EPRI and NEA on global research activities in various fields of nuclear energy, such as safety, radioprotection, scientific and technology developments, operational experience, economic analysis and waste management. It outlines the scope and objectives of a five-year agreement for NEA and EPRI to establish a formalised dialogue. Read more 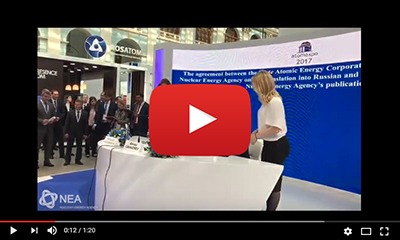 On 19-21 June 2017, the NEA participated in the ATOMEXPO 2017 International Forum, which brought together key figures in the global nuclear energy industry. Among other activities, NEA Director‑General Mr William D. Magwood, IV, spoke at the opening day plenary session on the role of nuclear power in a low‑carbon energy future. In his speech he noted the importance of understanding the long-term role of baseload power plants in meeting future energy requirements and environmental goals. On the first day of the Forum, the NEA and Russian State Corporation ROSATOM signed an agreement to facilitate the translation of key NEA reports into Russian in order to enable the broader dissemination within Russia of important nuclear safety information, economic analysis and the results of the scientific work at the NEA. In a widely attended signing ceremony, ROSATOM Director-General Alexey Likhachov signed the agreement on behalf of the ROSATOM and NEA Director-General Magwood signed on behalf of the NEA.

On 30 May-1 June 2017, the NEA Studsvik Cladding Integrity Project (SCIP-3) steering bodies held a meeting at the Swedish Studsvik establishment with more than 70 participants representing 30 partner organisations from member countries participating in SCIP‑3. Participants discussed the recent experimental results and the project's future programme of work. Phase I of the SCIP project was completed in June 2009 and its second phase ended in June 2014. SCIP‑3, which started in July 2014, aims to study fuel behaviour loss‑of‑coolant accident (LOCA) and off‑normal temperature transients from a safety and operational point of view. Through SCIP‑3, representatives from regulatory bodies, utilities, vendors and research organisations aim to establish a common understanding, enabling a shared view on safety matters, operational concerns and mechanisms of different phenomena. 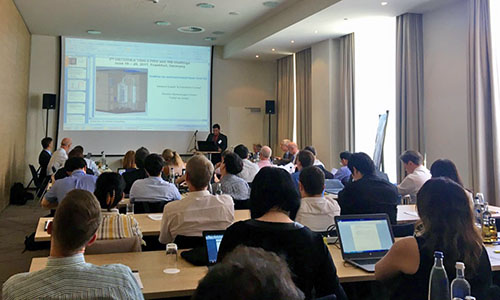 On 19-20 June, meetings were held on the NEA Thermal‑hydraulics, Hydrogen, Aerosols and Iodine (THAI-3) Project, which investigates severe‑accident phenomena in containment conditions through experiments performed at the THAI facility in Germany. The meetings marked the first participation of India's Atomic Energy Regulatory Board (AERB), Bhabha Atomic Research Centre (BARC) and Nuclear Power Corporation of India Ltd. (NPCIL), which had been formally admitted to the project earlier this year. Experiments on the performance of passive autocatalytic hydrogen recombiners in adverse‑flow conditions have already been completed and experiments on entrainment of fission‑product contamination from water pools have begun. Starting next year, tests on hydrogen deflagration and fission-product resuspension will be conducted. In addition to various experiments on specific water‑cooled reactor aerosol and iodine issues, as well as on hydrogen mitigation under accidental conditions, a significant programme of analytical work with computer codes has also developed among the partners. 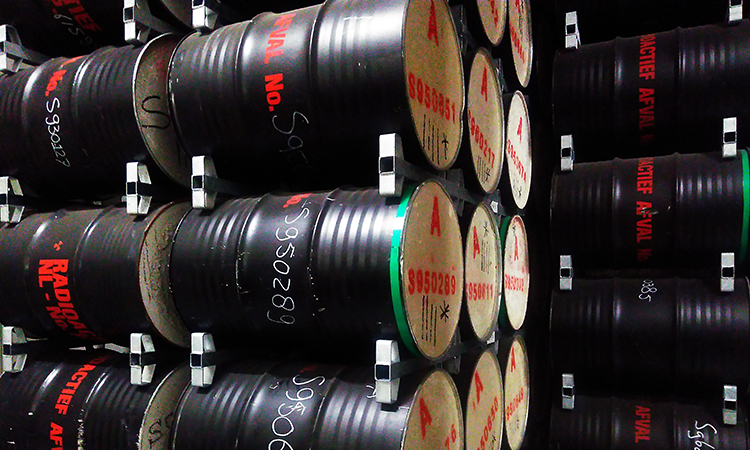 The NEA initiative on the Preservation of Records, Knowledge and Memory (RK&M) across Generations held a meeting on 13-15 June 2017 at Nucleus: The Nuclear and Caithness Archive in Wick, Scotland. Located near the Dounreay site, which played a pioneering role in the development of the United Kingdom's nuclear industry in the 1940s, Nucleus is home to the archives of the UK civil nuclear industry and the historical archives of the county of Caithness. Set up by the UK Nuclear Decommissioning Authority (NDA), it collects and stores documents, photographs and films recording the history of nuclear power in the UK in order to ensure that nuclear knowledge is preserved for future generations. During the meeting, participants discussed the current work being undertaken by the RK&M, including the "Key Information File" (KIF), which will provide an international, standardised structure for synthesising key information about national repositories. The site visit allowed members to examine the functioning of archives and to gain a better understanding of practices in archiving. 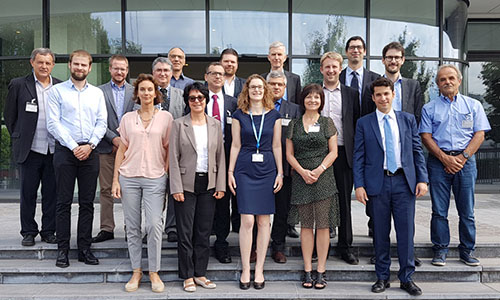 Benchmarking in the context of NPP decommissioning costs

The NEA has updated, in co‑ordination with the Permanent Delegation of Japan to the OECD, the report on the Regulatory and Institutional Framework for Nuclear Activities in Japan. These NEA country reports provide comprehensive information on the regulatory and institutional framework governing nuclear activities in OECD and NEA member countries. Each country profile provides a detailed review of a full range of nuclear law topics, including: mining regime; radioactive substances; nuclear installations; trade in nuclear materials and equipment; radiation protection; radioactive waste management; non‑proliferation and physical protection; transport; and nuclear third party liability. The report on Japan is available for download at oe.cd/20C. Further information on nuclear legislation in Japan is available at oe.cd/NEA-law-Japan. 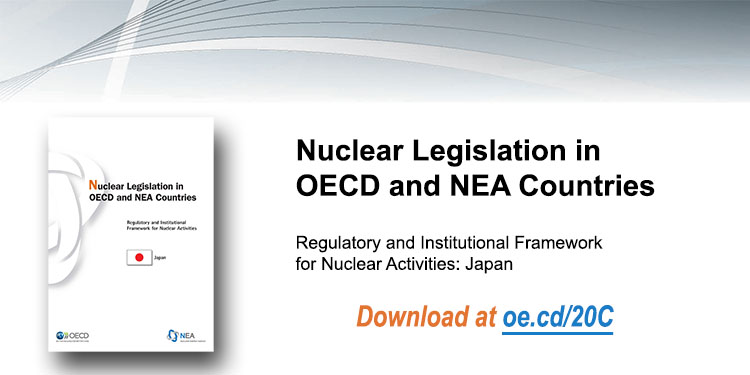 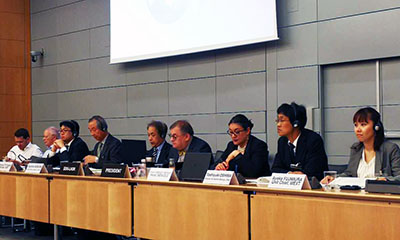 The NEA Nuclear Law Committee (NLC) met on 21-22 June 2017, bringing together 70 experts from member countries and international organisations, as well as several representatives from non-member countries, including China, Lithuania and Romania. Participants at the meeting exchanged information on the latest national developments in nuclear law and discussed current activities conducted under NLC auspices on nuclear liability, legal aspects of nuclear safety and public participation. The meeting also featured a topical session with representatives from the Government of Japan who provided updates on the compensation by TEPCO of the victims of the Fukushima Daiichi nuclear power plant accident. 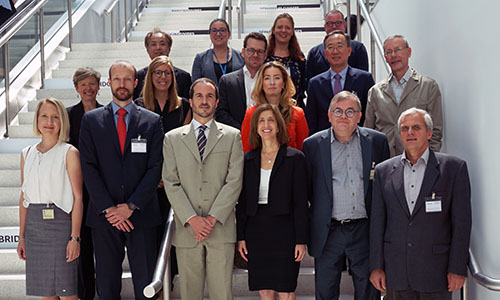 On 20 June 2017, the NEA Working Party on the Legal Aspects of Nuclear Safety (WPLANS) held a meeting, bringing together 17 representatives from 11 member countries and the IAEA. During this meeting, three member countries and the NEA Secretariat provided topical presentations, including one on the NEA Committee on Nuclear Regulatory Activities (CNRA) with a view to promote collaboration between the two bodies. Participating members also discussed the different topics to be addressed by the WPLANS and decided to initially focus on the legal frameworks for long‑term operation established by NEA member countries.

On 23 June 2017, the NEA Working Party on Nuclear Liability and Transport (WPNLT) held its first meeting with 22 representatives from 11 member countries, as well as from the European Commission (EC), the IAEA, the insurance industry and the World Nuclear Transport Institute (WNTI). Participants discussed the working party's future programme of work and viewed presentations provided by representatives from the insurance and nuclear transport industries. The WPNLT aims to examine issues relating to the interpretation and application of international nuclear liability instruments to nuclear transport. It also seeks to promote the exchange of legal information on nuclear liability as applicable to nuclear transport and the sharing of related experience among member countries.

Contracting Parties to the Paris Convention 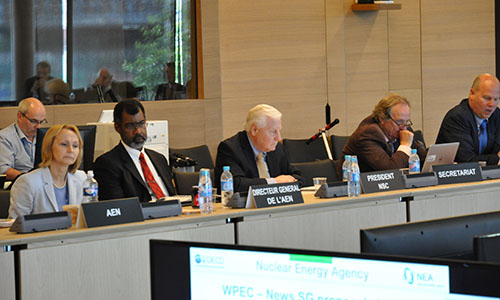 The NEA Nuclear Science Committee (NSC) held its annual meeting from 31 May to 2 June 2017 to review progress in each of its work areas, including reactor physics, fuel cycle physics and chemistry, criticality safety, material science and radiation shielding. The meeting featured a presentation on the new NEA TCOFF Project on the Thermodynamic Characterisation of Fuel Debris and Fission Products Based on Scenario Analysis of Severe Accident Progression at the Fukushima-Daiichi Nuclear Power Station. Participants noted the characterisation of the corium and fuel debris as an important first step in the decommissioning process. Subsequently they had an in-depth discussion on the role of nuclear science in decommissioning, which emphasised the strong links between the economics of decommissioning and the characterisation of the final waste product. The discussions underlined the importance of modelling and simulation in providing best estimates and credible uncertainties for key radionuclides in nuclear waste. The meeting also featured a special session entitled “Building a scientific community around material test reactors (MTRs) and establishing a systematic validation/qualification process for innovative fuels and materials”, during which the participants noted the recent advances in instrumentation and how these advances are being used to provide fundamental insights into material behaviour under irradiation. They agreed to organise a workshop on this topic in order to optimise experimental technologies for fuels and materials validation and qualification. 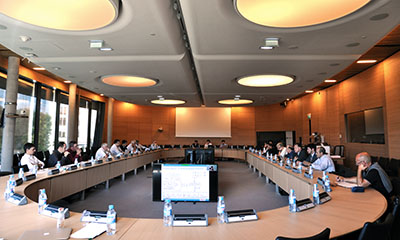 On 26-30 June 2017, the NEA Working Party on Nuclear Criticality Safety (WPNCS) held its annual meetings, during which more than 60 experts from 16 countries discussed technical and scientific issues on a variety of topics, including criticality excursions analyses, modelling of used nuclear fuel depletion, Monte Carlo modelling and uncertainty analysis for criticality safety assessments. The participating experts explored ways to dynamise the WPNCS activities. An important highlight of the meetings was the official release of the Spent Fuel Isotopic Composition Database (SFCOMPO-2.0). Developed by the NEA in close collaboration with Oak Ridge National Laboratory (ORNL), this database allows access and visualisation of open experimental isotopic assay data, reactor design and operational histories, which have been independently reviewed against the original experimental reports. The SFCOMPO-2.0 release contains data from over 750 spent nuclear fuel samples analysed in post-irradiation experiments, from 44 different reactors covering eight international reactor designs. SFCOMPO-2.0 is today the world’s largest database of open assay data. Find out more at oe.cd/SFCOMPO.