One of the consequences of the interaction of high energy particles (neutrons, ions or electrons) with crystalline materials is the formation of lattice defects resulting from the energy transfer towards the atoms. A very useful and widely used standard has been proposed by Norget, Torrens and Robinson in 1975 to evaluate the number of Frenkel pairs formed for a given energy transferred to the primary knocked-on atom, and therefore the number of "displacements per atom", or so-called NRT-dpa (or just dpa in short). This evaluation of the primary damage suffers a number of limitations. First, it does not account for the recombination of atoms occurring during the cascade process. Molecular Dynamics simulations have shown for more than a decade that the number of defects remaining after the cascade is only about a third of the NRT rule. Second, this simple standard does not account for the nature and spatial distribution of the defects, which are also very important for the subsequent time evolution of the defect population. Third, the dpa value is inversely proportional to the displacement threshold energy; but this quantity is itself not very robust. The consequences of these limitations are that it becomes very difficult to compare the primary damage resulting from different irradiation conditions (nature of damaging particles and their energy spectra), or different materials.

The main objectives of this expert group are to: 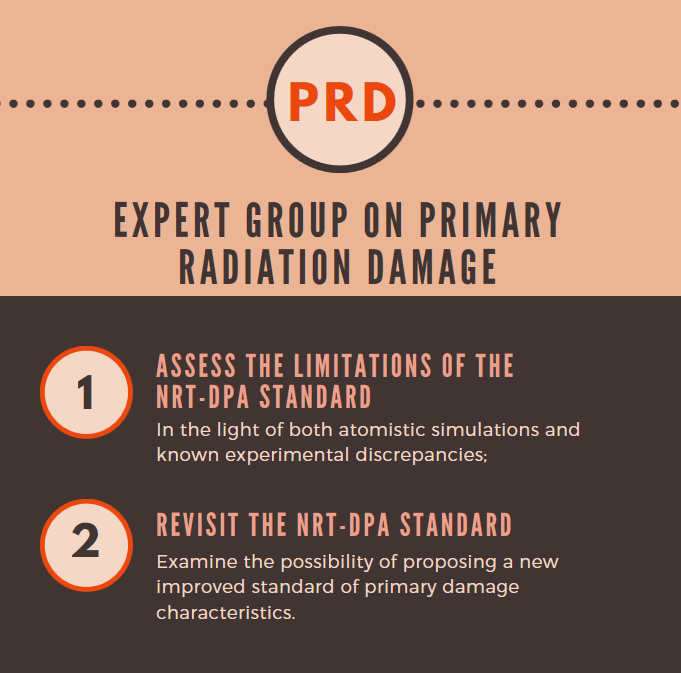 SEE ALL IN THIS CATEGORY
NEA Document
Most recent

The Working Party on Multi-scale Modelling of Fuels and Structural Material for Nuclear Systems (WPMM) was established to deal with the scientific and engineering aspects of fuels and structural materials, aiming at establishing multi-scale models and simulations as validated predictive tools for the design of nuclear systems, fuel fabrication and performance. 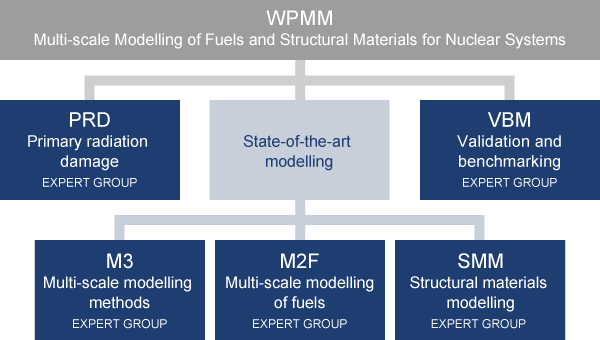 Under the guidance of the Nuclear Science Committee (NSC) and under the mandate of the Working Party on Multi-scale Modelling of Materials (WPMM), the scope of the Expert Group on Multi-scale Modelling Methods (EGM3) is to provide an overview of the various methods and levels of models used for modelling materials for the nuclear industry (fuels and structural materials).

Under the guidance of the Nuclear Science Committee (NSC) and under the mandate of the Working Party on Multi-scale Modelling of Fuels and Structural Materials for Nuclear Systems (WPMM), the objective of the Expert Group on Multiscale Modelling of Fuel (EGM2F) is to share and support the development of a multi-scale modelling approach of fuels in support of current fuel optimisation programmes and innovative fuel design.

The objective of the Expert Group on Structural Materials Modelling (EGSMM) is to provide a critical review of the state-of-the-art concerning the use of a MMA to describe the changes induced by irradiation in SNMs.

WPMM Expert Group on Validation and Benchmarks of Methods (EGVBM)