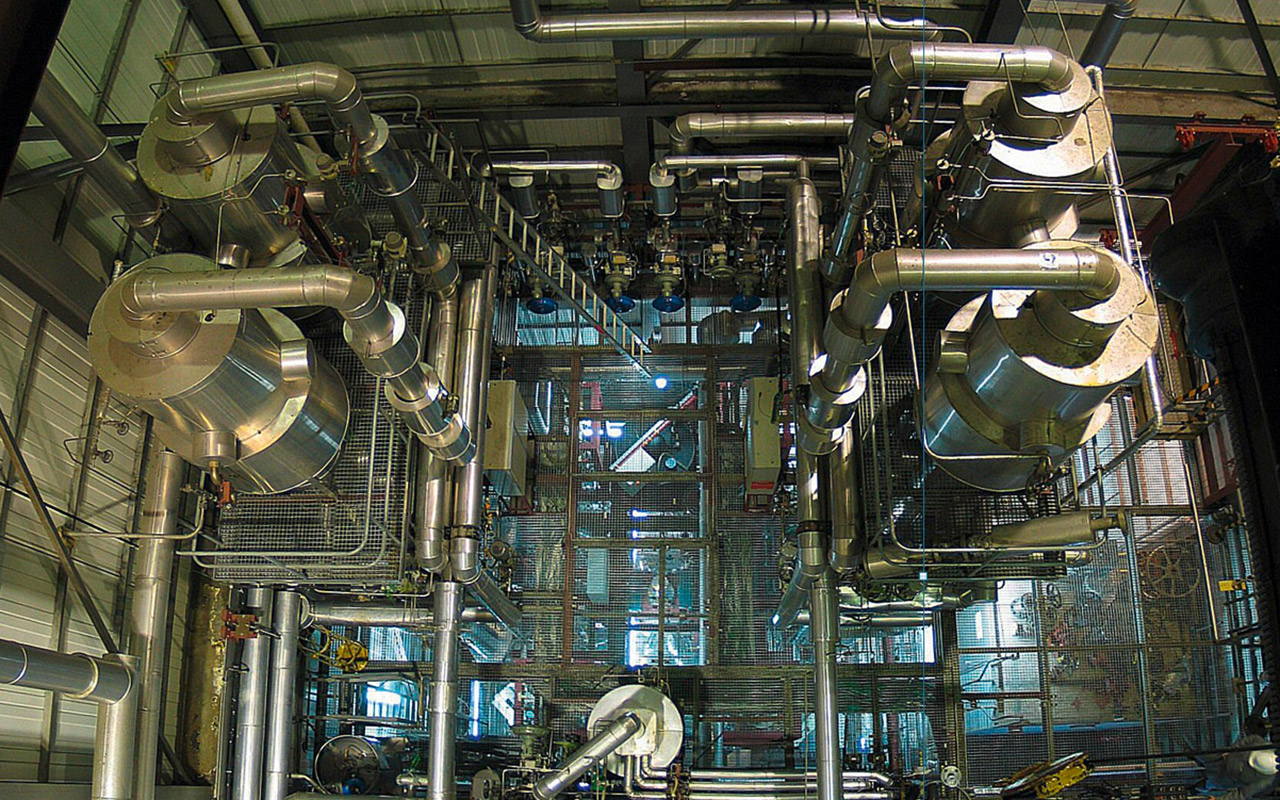 For a number of years, Framatome GmbH has conducted experiments on reactor thermal hydraulics at the PKL facility, including earlier experiments carried out in the framework of the SETH project (2001‑2003). Complementary tests have also been performed in some PKL phases at the PMK test facility of the Centre for Energy Research (CER), formerly MTA-EK, in Budapest, Hungary, and at the PWR-PACTEL test facility at the LUT University, Lappeenranta, Finland.

A significant number of tests from the PKL project have been performed as counterpart tests to tests of the ROSA/LSTF and ATLAS projects and have been the subject of comparative benchmark exercises.

In the first category of tests which dealt with inherent boron dilution during a small break loss-of-coolant accident, the key issue was whether there were plant thermal-hydraulic conditions that could produce reactivity insertion into the core, and thus a potential accident situation. The experiments tried to reproduce different plant and system configurations, especially those that were believed to be potentially the most serious, thus encompassing an envelope of conservative cases. Measures that could remedy the boron dilution issue were also investigated.

The second category of tests was to assess accident management operations of the primary circuit after a loss of residual heat removal capability during mid-loop operation. Tests with closed reactor circulation system explored safe procedures for re-establishing heat removal and avoidance of significant reactivity insertion into the core. Tests with open circulation systems aimed to explore measures for preventing fuel damage and maximising safety margins provided by different means of coolant injection.

Two tests were performed in 2004 and two in 2005. A workshop was also organised in 2005 covering an analytical exercise with code predictions related to the PKL tests. The 2005 tests focused on the loss of RHR in a three-quarter loop operation with the reactor cooling system closed and on the effect of pressuriser temperature on the RCS inventory distribution. The two tests were carried out to address the following scenarios:

Three final tests for phase one were performed and reported on in 2006. The first phase of the project ended with a final meeting in May 2007.

The project data package can be requested to the  Computer Program Services of the Data Bank.

The first category of tests included tests addressing the heat transfer mechanisms in the steam generators (SGs) in the presence of nitrogen, steam and water, in both vertical and horizontal steam generators. Also covered were cool down procedures in the case where steam generators had partly dried out on the secondary side. An additional test addressed heat transfer in the steam generators under reflux condenser conditions (e.g. fast secondary side depressurisation). Fast cool down transients (with a water-filled reactor coolant system) such as main steam line break, completed by tests that mixed hot and cold water in the reactor pressure vessel (RPV) downcomer and the lower plenum were also considered in this phase. Further investigation addressed boron precipitation processes in the core following large break loss of coolant accidents (LB-LOCA).

* The tests on the heat transfer mechanisms in the SGs in the presence of nitrogen were complemented by tests in the PMK test facility in Hungary for horizontal SGs.

** The tests on fast cool down transients were completed with tests at the Rossendorf Coolant Mixing Model (ROCOM) test facility in Germany on mixing in the RPV downcomer and the lower plenum.

The final summary report of the PKL-2 project is available here.

The project data package can be requested from the  Computer Program Services of the NEA Data Bank.

The first category of tests addressed safety issues related to beyond design basis accident transients with significant core heat-up, i.e. station blackout scenarios or LOCAs in connection with the failure of safety systems. Without adequate accident management (AM) procedures, the postulated course of events would lead to a severe accident scenario with core damage. In the tests, the efficiency of very late initiated AM measures were established so that the safety margins could be explored. Both scenarios were connected with a perfomance assessment of the core exit temperature (CET) which is normally used as criterion for the initiation of AM measures involving emergency operating procedures and/or severe accident management measures.

With respect to current safety issues, events in cold shut down state (i.e. failure of residual heat removal (RHRS)) were also covered by the PKL-3 test phase. Findings from the the first two phases on thermal hydraulic phenomena (e.g. pressure evolution following failure of RHRS, boron dilution) were compared to the transients test conducted with an open RCS.

The second category of tests addressed some issues investigated in the previous PKL phases that could not be completed. Parameter variations from tests conducted in PKL-2 were implemented in PKL-3, either to provide an extension to already existing databases on cool down procedures under asymmetric natural circulation, or to determine the sensitivity of boron precipitation in the core following LB-LOCA for specific parameters. As with previous phases, complementary tests at ROCOM, PMK and PWR PACTEL facilities were also considered for phase three.

In 2015, two meetings were held and final tests were completed. A counterpart test was performed to compare with a test conducted at the ROSA facility in Japan. The ATLAS Project also condidered reproducing a PKL-3 test for comparison.

With all tests completed, the operating agent, Framatome GmbH, conducted analysis of the results and produced the final report in 2016. Project participants and Framatome GmbH completed discussions on a follow-up phase to cover gaps in knowledge. A workshop to discuss analytical activities related to both PKL-3 and ATLAS projects was organized in Lucca, Italy, in 2016. Main conclusions and recommendations from the workshop are presented here.

The project data package  can be requested from the Computer Program Services of the NEA Data Bank.

Phase four began in July 2016 and terminated in September 2020. It focused on parametric studies on thermal-hydraulic procedures for model development and validation of thermal-hydraulic system codes, and on experimental verification of cool-down procedures and operation modes for different incidents and accidents.

During the PKL-4 project phase, eight experiments – some with several test runs – were completed between June 2016 and September 2020 addressing:

A workshop to discuss analytical activities related to both PKL-4 and ATLAS-2 projects was organiSed in Barcelona, Spain, in 2018. Main conclusions and recommendations from the workshop are presented here.

751.63 KB
Summary and Conclusions of the Joint PKL3-ATLAS Workshop on Analytical Activities

398.66 KB
Summary and Conclusions of the Joint PKL-ATLAS Workshop on Analytical Activities Related to the NEA PKL-4 and ATLAS-2 Projects