Despite the significant advances made in early phase emergency management as a result of INEX series, longer-term consequence management has remained a difficult challenge for emergency managers. In order to address the desire of NEA member countries to better prepare for the later phase response to a nuclear or radiological emergency, the NEA began development of the INEX-3 consequence management exercises. In order to assist in the development and organisation of the INEX-3 exercise series based on this general guidance, the WPNEM created in 2003 the INEX-3 Preparation Group.

This third series of INEX exercises focused on consequence management issues that would likely arise as a result of a nuclear or radiological emergency that has led to significant contamination of the populated environment. INEX-3 was designed to deliver tangible benefits to participant countries in the form of greater understanding of the challenges to be faced after the emergency phase of an incident has passed, the ability to compare national practices with other countries, and the opportunity to identify areas for improvement in consequence management that could be usefully addressed by the international community. The exercise was conducted in 2005-2006, evaluation workshop took place in May 2006.

National-level INEX-3 exercises were based on broadly comparable contamination footprint scenarios, focusing on medium- and longer-term consequence management aspects after radioactive contamination of the environment has occurred. Evaluations completed by each participating country provided information on the approaches taken with respect to each of the exercise objectives, providing a basis for comparison of national practices in longer-term consequence management. Following the completion of all of the exercises, an international evaluation workshop was held to allow participants and other interested countries to exchange their national experiences, analyse commonalities and differences in approaches, discuss the implications of such approaches on decision makers, and identify aspects of national decision making which would benefit from international co-operation and co-ordination. The exercise was based on a non-trivial contamination footprint scenario that would be done in such a way that relevant authorities would need to consider appropriate countermeasures. The exercise then focused on the medium- and longer-term decision making mechanisms in the affected countries, and on the similarities and differences with the decisions taken.

Unlike the previous INEX-2 and 2000 command post-exercise series in which each of the five international exercises were built upon a single national-level exercise in the accident host country with simultaneous play of other participating countries, the INEX-3 exercise was presented to each participating country as a stand-alone table-top exercise package that could be customised and implemented independently of other participants, according to national needs. These national exercises were conducted either independently or jointly with a neighbouring country (e.g. Austria and Germany, Czech Republic and Slovak Republic), based on the exercise scenarios prepared by the INEX-3 preparation group.

To investigate decision making processes in the medium- to longer-term following a nuclear or radiological emergency, focusing on the areas of:

INEX-3 mainly addressed the phases of the EPR highlighted in the chart below. 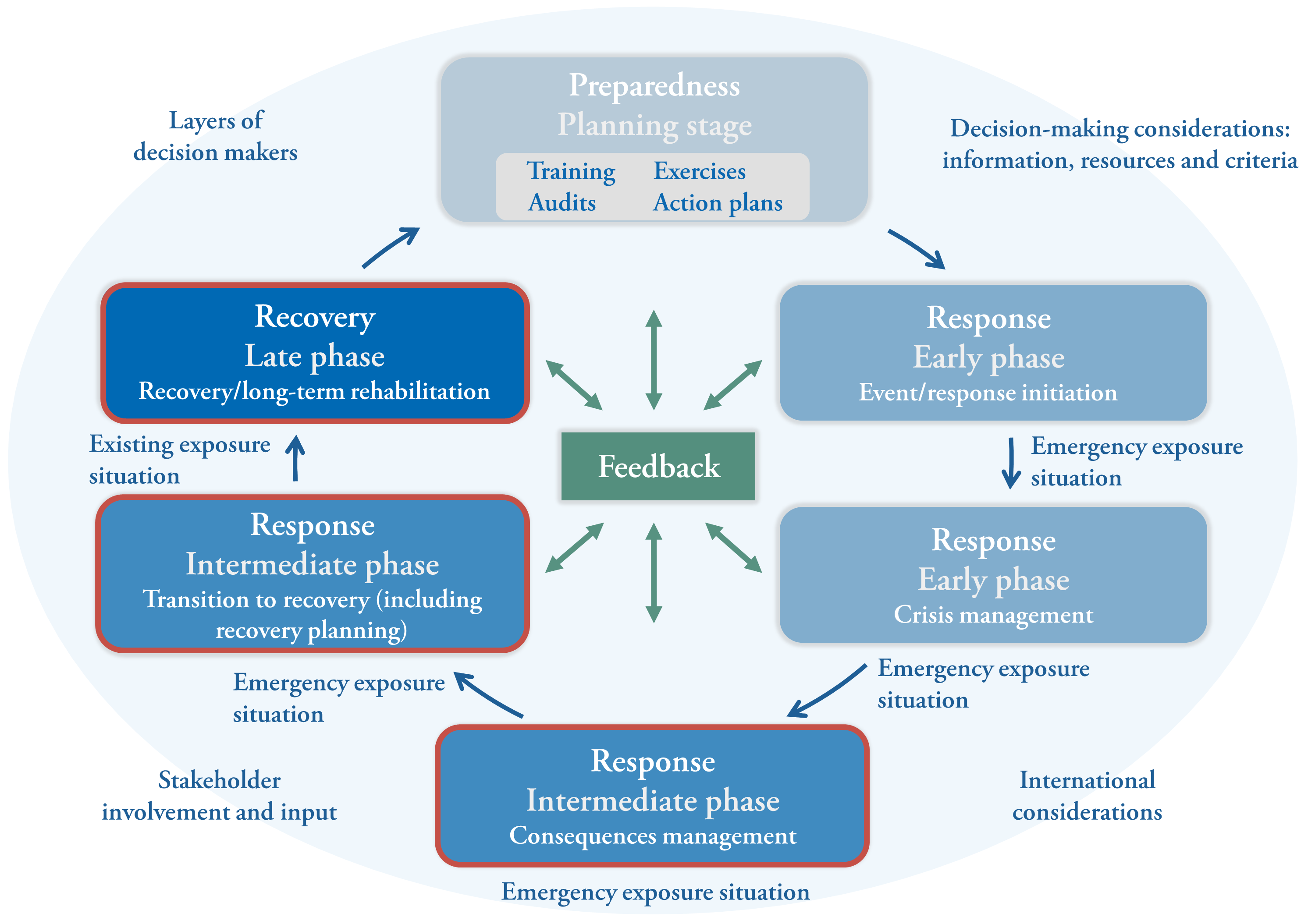 Building on the outcomes of the previous INEX early phase exercise series, the INEX-3 consequence management exercise represented an important step towards improving the ability of national authorities to manage the longer-term issues following a nuclear or radiological emergency.

As a new type of exercise focusing on the less explored area of longer-term consequence and recovery management issues, the INEX-3 outcomes generally provided a set of recommendations on areas for improvement, rather than a clear list of best practices and approaches. Importantly, it brought a clear recognition of the importance of stakeholder involvement aspects in later phase
consequence management, and the interaction and interdependency of decision making and approaches to stakeholder communication, agriculture, food and other countermeasures, recovery management, waste and compensation.

Moreover, based on the review of each identified issue to determine its current status internationally, to identify gaps and areas for improvement, and investigate any linkages into other related projects, the WPNEM identified a series of INEX-3 follow-up activities that would bring value to the international community, including:

Finally, the WPNEM reviewed and analysed the issues that were identified, actions arising and lessons learnt from a range of national and international exercises, focusing on the experience gained by the NEA, participating countries and the broader emergency planning community through the INEX series. A comprehensive report on Strategy for Developing and Conducting Nuclear Emergency Exercises was published in 2007.