1 January 2020 marked the beginning of the 10th mandate of the European Nuclear Energy Tribunal. The Tribunal consists of seven independent judges appointed for five years by decision of the OECD Council. It has jurisdiction over disputes between states parties to the Paris Convention on Third Party Liability in the Field of Nuclear Energy or to the Brussels Convention Supplementary to the Paris Convention regarding the application or interpretation of these Conventions. The OECD Council designated as judges for the 10th mandate of the Tribunal: Ms Ulla-Maija MOISIO (Finland), Ms Federica PORCELLANA (Italy), Mr Francis DELAPORTE (Luxembourg), Ms Ida SØREBØ (Norway), Mr Miguel SOUSA FERRO (Portugal), Mr Antonio VERCHER NOGUERA (Spain) and Mr Khalil BUKHARI (United Kingdom). The Tribunal will hold its Inaugural Session on 7 February 2020 at the OECD headquarters in Paris. Read more on the ENET at oe.cd/15O and on the Paris and Brussels Conventions at oe.cd/15P.
Published date: 14 January 2020 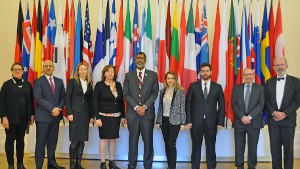