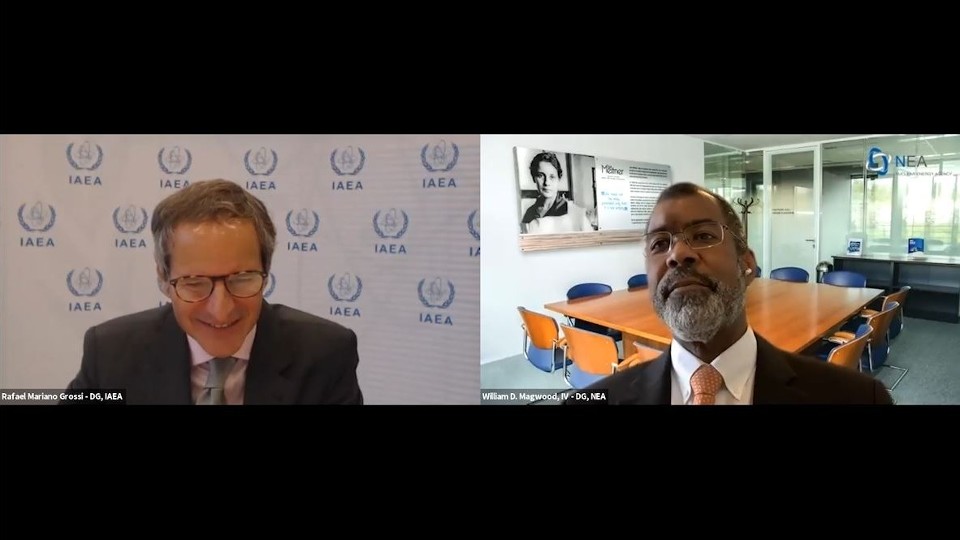 The NEA is engaging with leading figures in the energy sector to explore new ways to address today's challenges. The latest in‑depth conversation was with Rafael Mariano Grossi, Director General of the International Atomic Energy Agency (IAEA), and NEA Director‑General William D. Magwood, IV on 15 October 2020.

Grossi and Magwood conversed about the current status of nuclear power, as well as future outlook for global nuclear technologies, including the potential of further development and implementation of flexible nuclear production. “The need for flexibility in electricity generation and system operations will, I believe characterise future energy systems over the medium and future term,” Grossi said.

Magwood underlined the IAEA’s active support for nuclear newcomer countries and asked Grossi about the prospects and concerns for emerging nuclear energy countries. “We see more and more countries approaching us. My impression is that we will see more than a dozen turning into nuclear energy in the next decade or so,” Grossi said. “There, what we see Bill, is promise. But also a great priority where we need to make sure that we provide these countries with the necessary guidance in terms of regulatory capacity and institutionality.”

In 10-15 years, 10 to 12 newcomer states could be operating nuclear power plants in addition to the existing 31 countries - IAEA Chief @RafaelMGrossi #NEAWebChat

Magwood noted that the nexus point between commercial nuclear power and nuclear proliferation is a hot topic of global debate. Grossi and Magwood both underlined the imperative need to have a very strong nuclear safeguards system and the Treaty on the Non-Proliferation of Nuclear Weapons (NPT) that, under the responsibility of the IAEA, aims to prevent the spread of nuclear weapons and weapons technology.

In response to the audience questions on proliferation risks stemming from new nuclear technologies, Grossi said that the IAEA actively responds to the challenges as they present themselves. “What we see is that, with new designs, with new technologies being introduced, the proliferation resistance has, in fact, been improving,” he said.

The conversation also highlighted the role that nuclear energy could play – as a clean, dispatchable and stable energy source – in achieving the decarbonisation objectives set by the Paris Agreement.

Grossi noted that the IAEA expects to have an opportunity to present the viewpoint of the nuclear sector at the 26th United Nations Climate Change Conference will take place in November 2021 in Glasgow. “We are at a place where we need to make policy and bring solutions to the people out on the street that need energy and electricity and do not want to continue destroying the planet,” he said. Grossi and Magwood agreed that nuclear energy is part of the solution together with the renewables.

“To discuss the #ClimateChange problem and clean and sustainable solutions without considering nuclear doesn’t seem like an honest discussion. Nuclear energy is part of the solution together with renewables,” IAEA Chief @RafaelMGrossi #NEAWebChat

Magwood applauded the IAEA’s support to member states in response to the COVID-19 pandemic. “Working under the pandemic conditions was quite unique,” Grossi responded. “We had to mount a big logistical operation and fortunately we were able to maintain the continuity of the inspection efforts. And this continues, unfortunately, now that we are again in a difficult part of the curve.”

Magwood and Grossi both highlighted the impressive performance of regulators and nuclear operators in the face of the COVID crisis, which have adapted very quickly and efficiently to ensure the safe and reliable generation of nuclear energy around the world. “What we saw was a tremendous, I would say, resilience, predictability and dependability of the fleet and the regulators,” Grossi said. “Over the long-term we expect this accumulated experience to be put to good use.”

“IAEA’s project to fight #COVID19 is the biggest in the history of the Agency. Just recently we launched a Zoonotic Disease Integrated Action initiative, ZODIAC, to help the world better prepare for future pandemics like #COVID19,” IAEA Chief @RafaelMGrossi #NEAWebChat

The dialogue underscored that gender equality and diversity are growing priorities across the nuclear sector. The IAEA and the NEA both support efforts to pursue gender parity in nuclear professions. Both Director Generals recently participated in the International Gender Champions Impact Group meeting hosted by the Canadian Nuclear Safety Commission (CNSC).

💬 "We are offering an opportunity for young women in every country to complete their studies with the @IAEAorg Marie Sklodowska-Curie Fellowships," says IAEA Head @rafaelmgrossi

The NEA looks fwd to working with @iaeaorg to pursue #genderequality in #nuclear 👩🔬✨#neawebchat pic.twitter.com/I0VpoXGO35 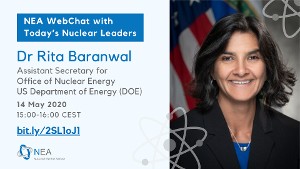 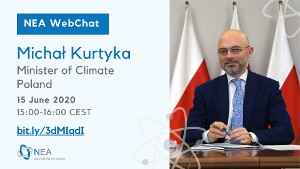 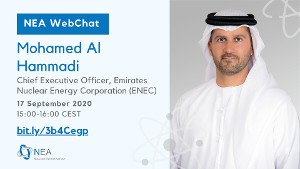