Bridging the gender divide in STEM 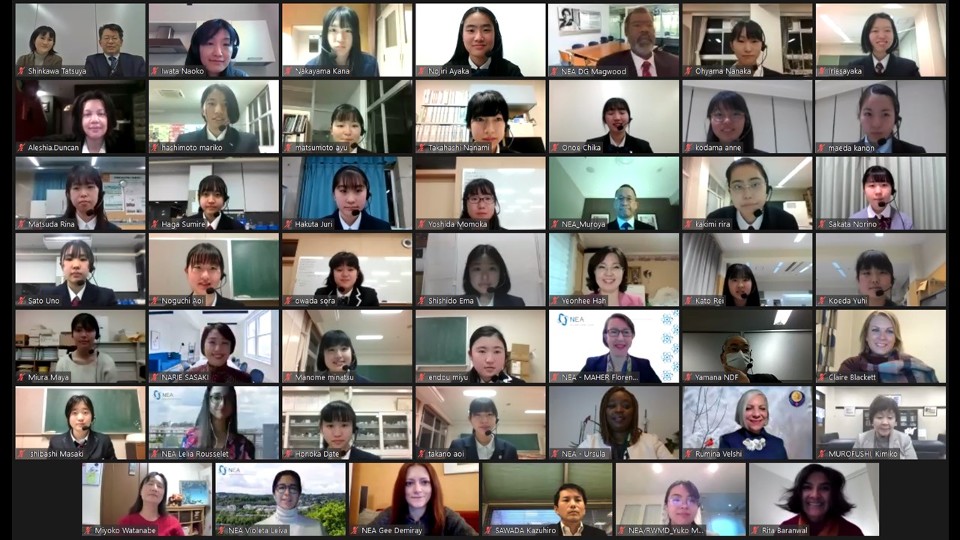 The 7th NEA International Mentoring Workshop in Science and Engineering was held virtually on 15-17 December 2020.

Nuclear capacity-building is an increasingly important issue for NEA member countries, all of which need new generations of specialists to ensure the continued safe and efficient use of nuclear technologies for a wide range of industrial, scientific and medical purposes. To mitigate the possibility of future shortages, capacity-building efforts need to be sustained and reinforced. In particular, further support is needed for young women as they are under-represented in science, technology, engineering and mathematics (STEM) fields. In view of this, the NEA has undertaken a variety of initiatives to assist its membership in their efforts to attract young people into STEM fields, including the Nuclear Education, Skills and Technology (NEST) Framework and International Mentoring Workshops.

Building on the six previous successful events organised in Japan, Russia and Spain to encourage young female students towards STEM, the 7th NEA International Mentoring Workshop in Science and Engineering was held virtually on 15-17 December 2020. Jointly organised with the Nuclear Damage Compensation and Decommissioning Facilitation Corporation (NDF), the event aimed to motivate young female students to explore STEM and nuclear decommissioning careers and to suggest ways to overcome any barriers that they may face along the way. 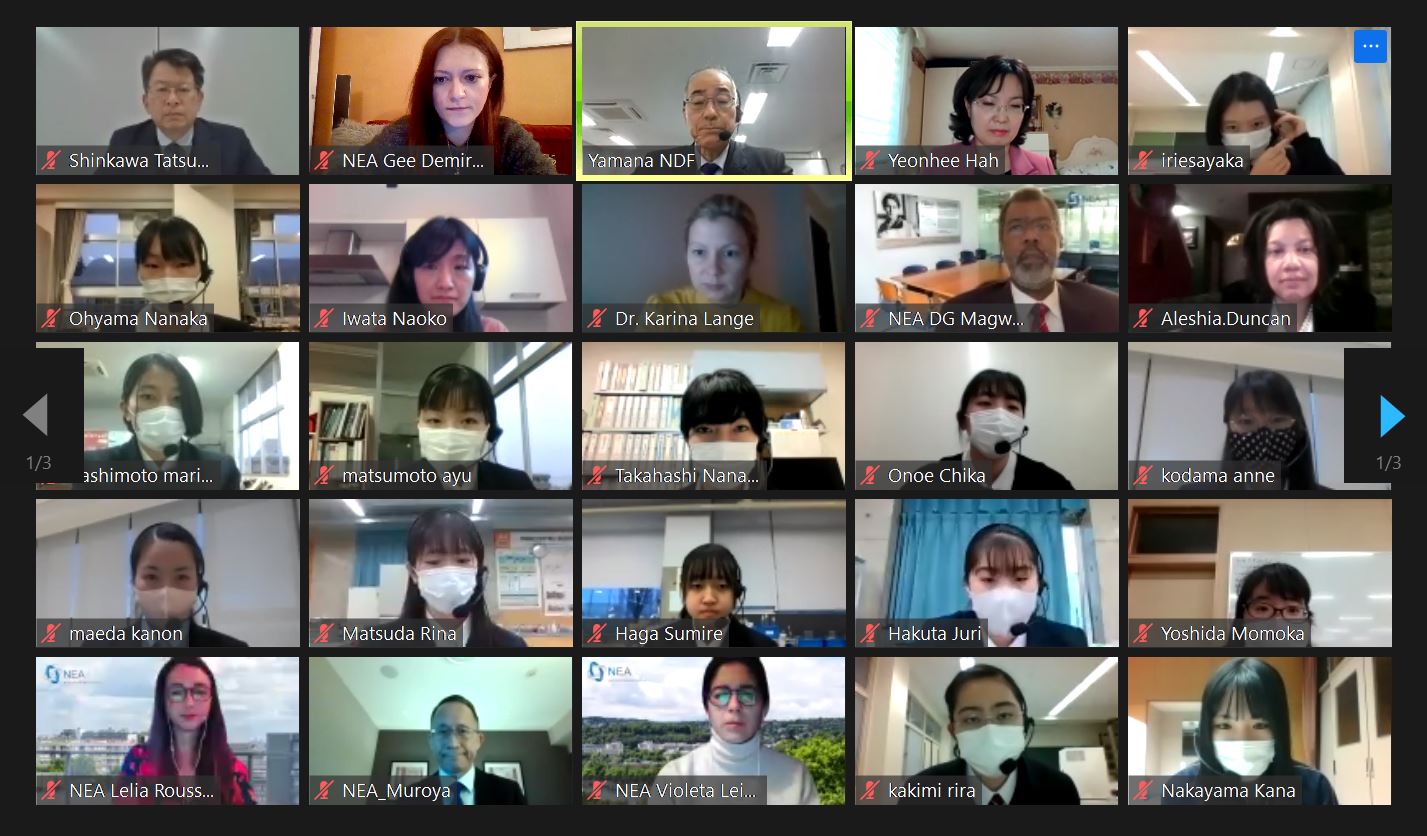 The three-day workshop opened with remarks from NDF President Hajimu Yamana and NEA Director-General William D. Magwood, IV. A guest speech was delivered by Tatsuya Shinkawa, Director-General for Nuclear Accident Disaster Response and Director-General for International Energy and Technology Cooperation at the Ministry of Economy, Trade and Industry (METI) of Japan. Keynote lectures were given by Kimiko Murofushi, President of Ochanomizu University, and Rumina Velshi, President and CEO of the Canadian Nuclear Safety Commission (CNSC). Yeonhee Hah, former Head of the NEA Division of Radiological Protection and Human Aspects of Nuclear Safety, who initiated the workshop series, also participated in the opening to share her reflections. 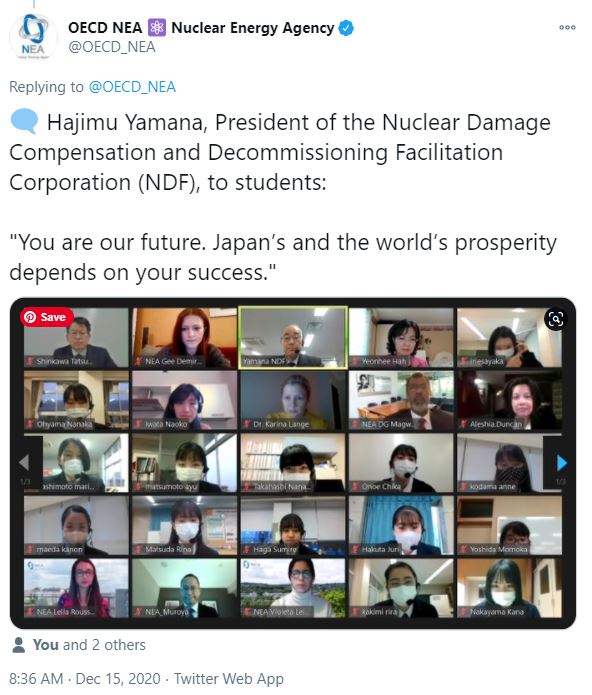 During his opening remarks, NEA Director-General Magwood underlined that the NEA encourages its membership to explore ways of attracting, recruiting and retaining women in science and technology. “The world really needs you,” he said to the participating students. “Because you’re very smart, important, creative people. And the world needs as many smart, important and creative people as it can get because there are so many challenges ahead.” 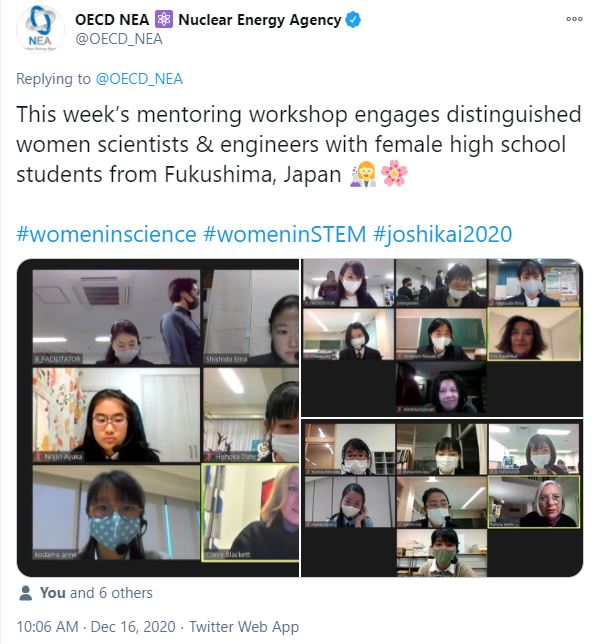 The students had a unique opportunity to interact with these highly accomplished female mentors and hear them talk about their lives, careers and experiences in science and engineering. During the workshop, the mentors exchanged their personal real-life experiences and shared advice and insights with the students. Conversations addressed the challenges faced by women professionals in many parts of the world and the steps that could be taken in order to support young women who aspire to have careers in STEM. The discussions highlighted concerns about maintaining a work-life balance and the potential benefits of studying at overseas universities. 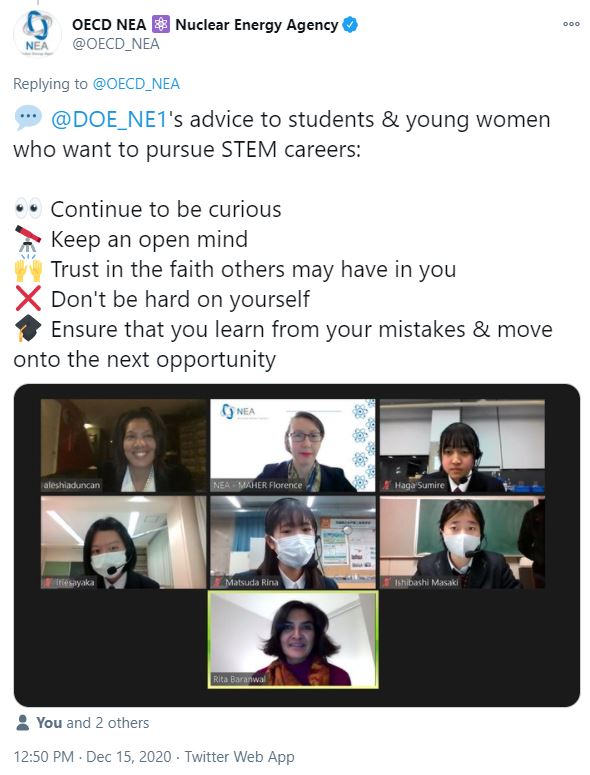 In preparation for the workshop, the students received a special video address by Hélène Langevin‑Joliot, distinguished nuclear physicist and granddaughter of Marie Skłodowska-Curie. In her message, Dr Langevin-Joliot spoke about her career, family heritage and the role of women in STEM. “Women should work on acquiring more confidence so they can make their presence felt, which is something that doesn’t come naturally to them,” she noted.

Participants acknowledged the importance of female mentors and role models who have been able to pursue successful careers in science and engineering in bridging the gender divide in STEM. They noted the need to improve working conditions for women and promote women-friendly workplaces. They also agreed on the need for young and aspiring female scientists to continue building their confidence. Mentors advised the students to pursue job shadowing and internship opportunities in order to help solidify their self-assurance and faith in their own abilities. 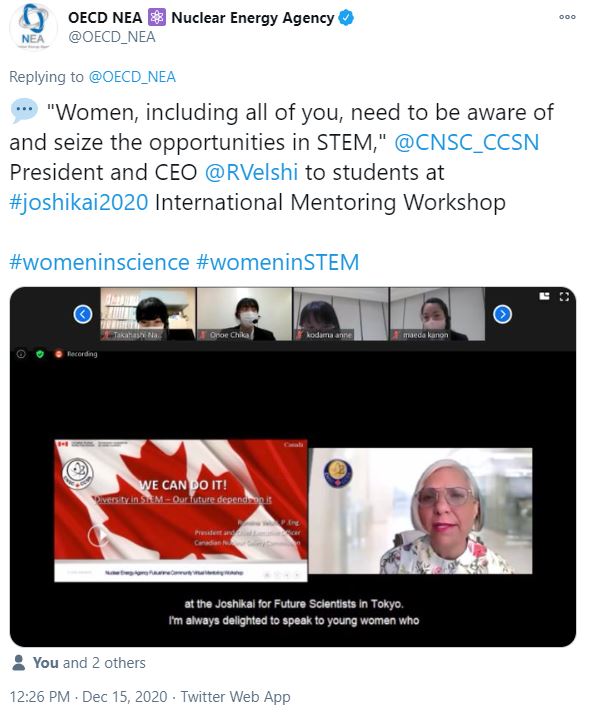 Overall, most students found the workshop to be a supportive and motivating event. Having listened to the mentors and discussed different perspectives, most students noted that the workshop had broadened their horizons and taught them about many career options and paths of which they were unaware prior to the event. Students also reported that they learned about the importance of communication and public speaking from the mentors.

Ms Sora Owada, a first-year student at Fukushima Prefectural Futabamiraigakuen High School who participated in the workshop, expressed that the workshop gave her confidence. "Through the mentoring workshop, I was able to tackle some challenges and concerns that I previously had about myself,” Ms Owada said. “I learned that I need to be confident and that women need to have more confidence in themselves. With confidence, the opportunities are limitless. Dr Iwata said that I can navigate the future by pursuing my dreams and working hard." 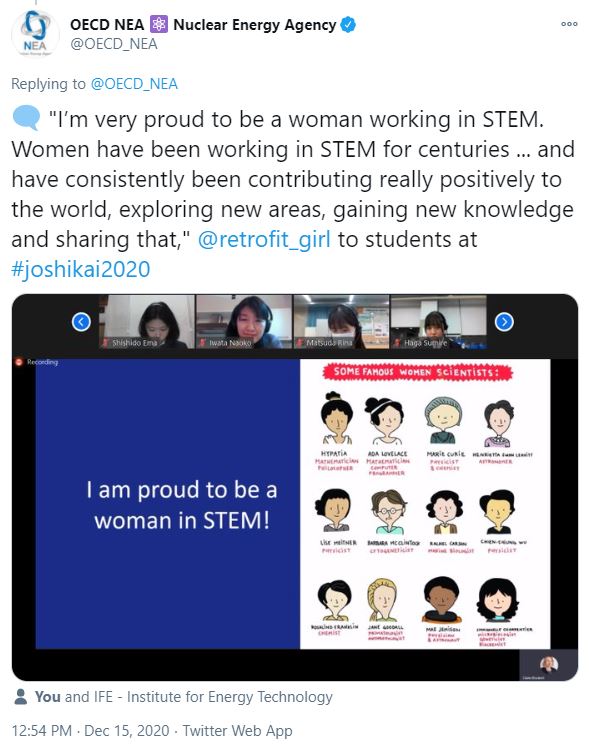 Some 22 of the students who attended the workshop were from the Fukushima Prefecture in Japan. As such, there were conversations about building the future of Fukushima in the aftermath of the Great East Japan Earthquake and the Fukushima Daiichi nuclear power plant accident. Many students expressed their enthusiasm for becoming scientists and engineers in order to play a part in the reconstruction of Fukushima. Ms Chika Onoe, a second-year student at Hiroo Gakuen Senior High School, observed that there is not much awareness about the current situation in Fukushima and said that she wants to help accelerate the pace of improvement. Another student, Ms Honoka Date, a first-year student at Fukushima Prefectural Asakareimei High School, shared similar sentiments about making a positive contribution to Fukushima’s future. “For the sake of Fukushima, I want to do something. I don’t think that many people know about Fukushima and I can convey the message,” she said. 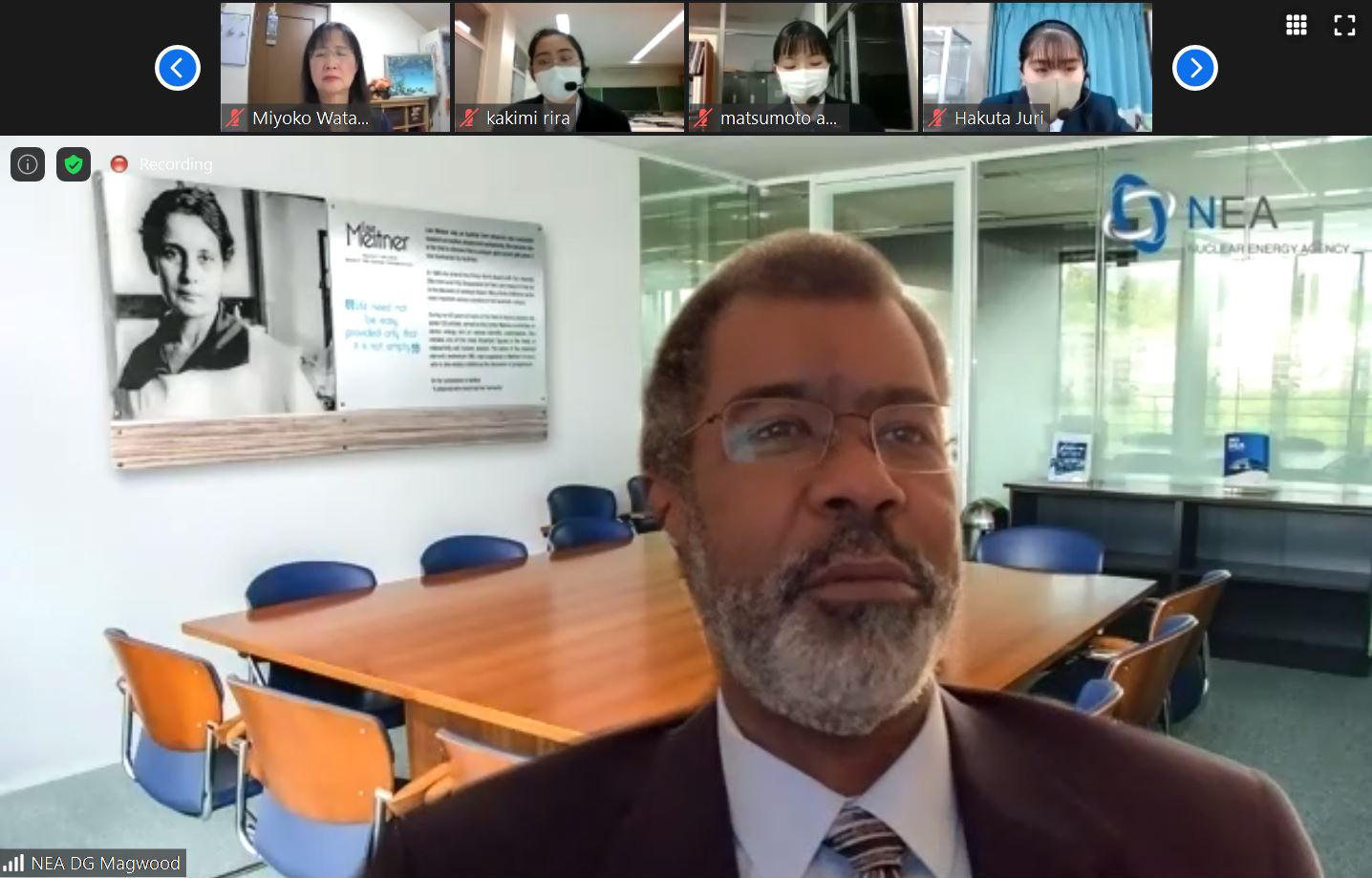 “We recognise that workshops and meetings such as these will not close the STEM gender gap overnight. However, we believe that it will have been a very worthwhile effort even if we give some young women the encouragement to pursue their dreams and become science and technology professionals,” said NEA Director‑General Magwood. “We look forward to exploring possible paths with our member countries to establish specific policies that make it easier for women to enter the nuclear field. Doing so will help build a better future for our economies, our societies and our planet.”

Achieving gender balance is key to maintaining a sustainable, vibrant and skilled workforce. The NEA encourages its membership to explore ways of attracting, recruiting and retaining women in science and technology and is willing to support more International Mentoring Workshops in both NEA and partner countries.

🗨️ Kimiko Murofushi, President of @OchadaiNews, to students at #joshikai2020:

"I hope many of you will join us and make your contributions as researchers 👩‍🔬" pic.twitter.com/AsD9zTJL9O