The NEA at COP21: "Why the Climate Needs Nuclear Energy"

The OECD Nuclear Energy Agency (NEA) and the International Atomic Energy Agency (IAEA) look forward to welcoming you at the 21st Conference of the Parties (COP21) of the UN Framework Convention on Climate Change (UNFCCC) during which they will be organising two side-events on "Why the Climate Needs Nuclear Energy". Visit the OECD Workspace in Blue Zone (Hall 3, Plot 7) on Thursday, 10 December, 13:15-14:45 and Friday, 11 December 2015, 11:15-12:45 to learn more about the contribution of nuclear energy to emissions abatement and sustainable development, and to pose your questions to the experts present.

The NEA is moving to a new address

On 9‑11 December 2015, the NEA will be relocating its offices from Issy‑les‑Moulineaux to Boulogne‑Billancourt, France. Web services will be unavailable during the three days of the move. The new office space will help provide improved service to the member countries, better synergies within the Agency and new amenities for employees. As from 14 December 2015, the NEA's new address will be 46, quai Alphonse le Gallo, 92100 Boulogne‑Billancourt. All phone numbers and fax numbers will remain the same.

The global response to address climate change is a key policy challenge of the 21st century. Many governments around the world have agreed that action should be taken to achieve large cuts in greenhouse gas (GHG) emissions over the coming decades, to adapt to the impacts of climate change and to ensure the necessary financial and technical support for developing countries to take action.

Find out more and download the brochure here: oe.cd/1aD 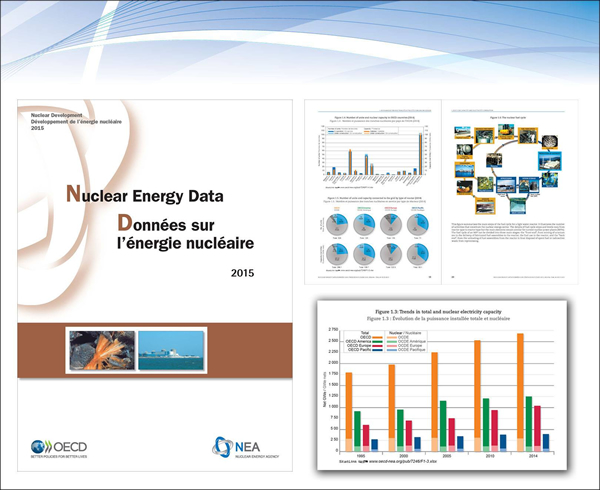 Find out more and download the new edition here: oe.cd/19e

On 20‑22 October 2015, the Advanced Thermal‑hydraulic Test Loop for Accident Simulation facility (ATLAS) Project held its fourth meeting in Daejeon, Korea. Based at the ATLAS facility at the Korea Atomic Energy Research Institute (KAERI), the main objective of the ATLAS project is to provide experimental data for resolving key LWR thermal‑hydraulics safety issues related to multiple high‑risk failures highlighted in particular by the Fukushima Daiichi nuclear power plant accident. The project has recently been joined by two new signatories: China Nuclear Power Technology Research Institute (CNPRI) and Tractebel Engineering – Engie Group of Belgium. At the meeting, KAERI reported the successful completion of five of the eight tests in the programme, including the test on behaviour following a station blackout with total loss of feed water to the reactor. The participants also decided to organise a joint benchmark workshop with the NEA Primary Coolant Loop Test Facility (PKL‑3) Project in April 2016 in Pisa, Italy, highlighting possible opportunities for future collaboration between the two projects. It was further decided that the sixth ATLAS meeting will be held in October 2016 in conjunction with the 11th International Topical Meeting on Nuclear Reactor Thermal‑hydraulics, Operations and Safety (NUTHOS‑11) in Korea, which will feature an ATLAS session or special topic day.

On 29-30 October 2015, the Generation IV International Forum (GIF) held its Policy Group meeting in Saint Petersburg, Russian Federation. The NEA gave a comprehensive report on the status of the Extension to the Framework Agreement and the recent developments in the contractual arrangements for the development of the six Generation IV systems. Christophe Béhar of the French Alternative Energies and Atomic Energy Commission (CEA), France, was elected as the new Chair, replacing the current chair, John Kelly, as from 1 January 2016.

On 23 October 2015, the Executive Committee of the International Framework for Nuclear Energy Cooperation (IFNEC) met in Sinaia, Romania, with more than 29 member countries and observers participating, including the NEA. NEA Director-General William D. Magwood, IV, gave a keynote lecture on challenges and opportunities facing nuclear energy. The official transition of the IFNEC technical secretariat to the NEA was also confirmed at the meeting. The NEA will take the lead to organise next year's IFNEC meetings and an international conference on the financing of nuclear projects.

Optimisation of radiological characterisation and decommissioning

On 30 September - 1 October 2015, the NEA Task Group on Radiological Characterisation and Decommissioning (TG‑RCD) held its third meeting. The group aims to provide member countries with up‑to‑date information and recommendations to consider on the selection and tailoring of strategies for optimising nuclear facilities characterisation from a waste and materials end‑state perspective. To help achieve this, the group distributed two questionnaires in spring 2015 and received more than 50 responses from 12 countries sharing their experience and knowledge. At the meeting, group members analysed the responses in order to identify key issues, paying special attention to factors for radiological characterisation that results from waste and materials management processes. An overview of the survey and preliminary results of the study have already been presented at GLOBAL 2015. The survey and evaluation of the final results will be presented at the International Symposium on Preparation for Decommissioning (PREDEC 2016) on 16‑18 February 2016, and later issued in a status report.

On 5 October 2015, the NEA Expert Group on Operational Safety (EGOS) held its annual meeting to discuss its key work areas and the directions of its next phase. In particular, the expert group decided that its work activities in 2016‑2017 will focus on the development of i) waste (acceptance) criteria for radioactive waste disposal; ii) an operational hazard database including hazard assessments; iii) a fire risk management programme including the design and operations of ventilation systems; and iv) safe and reliable on‑site transport options for radioactive waste. Noting the importance of operational safety in developing geological repositories, the EGOS is planning to organise a workshop in mid‑2016 to further examine all issues related to the safe operation of geological repositories.

The safety case for deep geological disposal of radioactive waste

The NEA Integration Group for the Safety Case (IGSC) held its annual meeting on 6‑8 October 2015 and held in‑depth discussions on the role of geo‑scientific arguments used in the siting process. Participants concluded that while the balance between geological and societal criteria is important in developing geological repositories, the ultimate goal remains to be achieving and enhancing safety, which relies on the performance of the repository system. The IGSC continues to face the increasing needs of societal interactions and communications with all stakeholders involved, including non‑technical communities, and plans to conduct future activities with other NEA working groups, such as the NEA Forum on Stakeholder Confidence (FSC). At the meeting, the IGSC also extended the duration of its EGOS sub-group until the end of 2017.

Participants in the NEA Radioactive Waste Repository Metadata Management (RepMet) initiative met on 20‑21 October 2015. In its current phase, the initiative is focusing on data and metadata relating to the waste package ready for disposal in the final repository. During the first part of the meeting, participants discussed a specific data model recently developed by a working group. In the second part, participants checked the flexibility of the data model and established the way forward for completing it. Overall, the discussions confirmed the robustness of the model and the next step for RepMet will be the finalisation of the data model for the waste package. 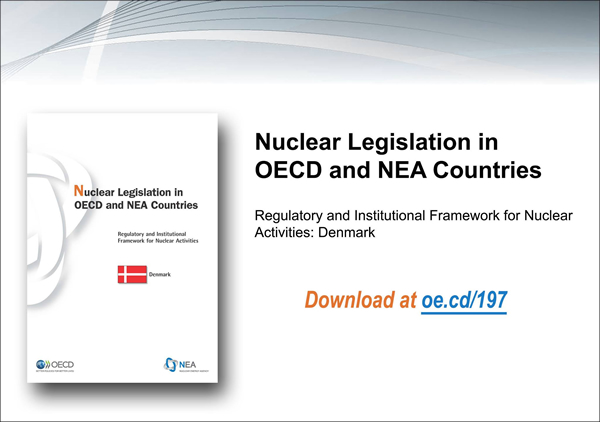 The NEA has updated, in co‑ordination with the Delegation of Denmark to the OECD, the report on the Regulatory and Institutional Framework for Nuclear Activities in Denmark. The NEA country reports provide comprehensive information on the regulatory and institutional framework governing nuclear activities in OECD and NEA member countries. Each country profile provides a detailed review of a full range of nuclear law topics, including: mining regime; radioactive substances; nuclear installations; trade in nuclear materials and equipment; radiation protection; radioactive waste management; non-proliferation and physical protection; transport; and nuclear third party liability. The report on Denmark is available for download at oe.cd/197. See other country reports at oe.cd/1ay.

The NEA Expert Group on Accident‑tolerant Fuels for Light Water Reactors (EGATFL) held its fourth meeting at the Paul Scherrer Institute in Villigen, Switzerland, in conjunction with the TopFuel 2015 conference. The meeting was attended by nearly 50 participants who discussed the group's activities and forthcoming technical reports by the group's three task forces. The report from Task Force 1 on Systems Assessment focuses on evaluation metrics, technology readiness level definition, the definition of illustrative scenarios for accident‑tolerant fuels evaluation and a review of available fuel performance and system codes suitable for modelling ATF candidate materials. Task Force 2 discussions on Cladding and Core Materials progressed in the definition of state‑of‑the‑art knowledge of fundamental properties and behaviour under normal operations and accident conditions for advanced core materials and components, in particular innovative cladding materials (coated and improved Zr‑based alloys, SiC and SiC/SiC composites, advanced steels and refractory metals) and non‑fuel components (advanced control rods, BWR channel box). Task Force 3 on Fuel Design worked on the co‑ordination of the technical report which will address three categories of innovative fuels: improved UO2, high‑density fuels and coated‑particle fuels. The task force meetings were followed by a plenary session on national programme updates related to accident‑tolerant fuels. 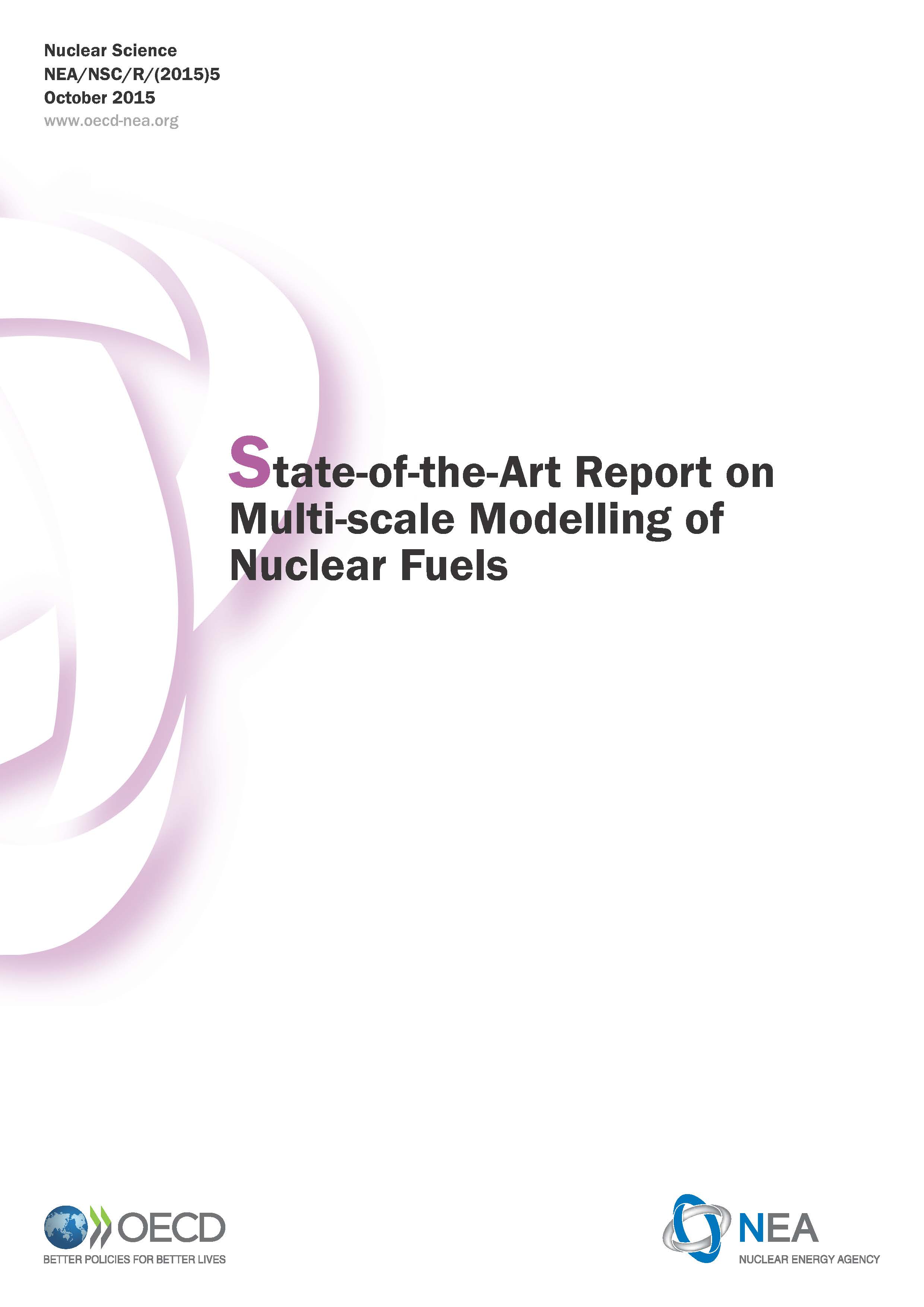 This report on multi‑scale modelling of nuclear fuels is one of a set of state‑of‑the‑art reports on multi‑scale modelling of fuels and structural materials commissioned by the NEA Nuclear Science Committee (NSC) and its Working Party on Multi‑scale Modelling of Fuels and Structural Materials for Nuclear Systems (WPMM). Multi‑scale modelling applied to nuclear fuel implies the generation of models for fuel from the atomic scale, through the mesoscale, to the macroscopic scale, spanning the enormous breadth of both time and length scales that must be considered to accommodate all phenomena. In addition, lower‑scale processes affect higher‑scale properties/behaviour, and in some cases the reverse can be true. Thus, any true simulation of fuel behaviour that is more than empirically based must allow for coupling among phenomena and across scales within fuel performance codes. This report assesses the scientific and technological bases for the multi‑scale modelling of fuels in support of current fuel optimisation programmes and innovative fuel designs. It focuses on the state of the art and future developments that need to be addressed in order to meet the requirements for fuel modelling applied to current and future nuclear systems. Download the report here: oe.cd/1al